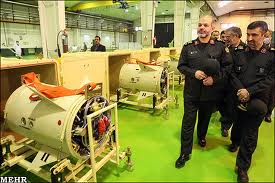 The IRGC increasingly controls vast financial assets and economic resources within Iran. By some estimates the IRGC may involved in upwards of 30-40% of all economic activity inside Iran. The Guard runs numerous companies and dominates many of Iran’s key industries including construction, shipping and energy among others. Many of the IRGC’s business and industrial activities – especially those connected to the oil and gas sector – are heavily dependent on the international financial system. The IRGC has become so entrenched in the Iranian economy that it has become nearly impossible to conduct business in Iran without touching some Guard entity.

The Guard controlled engineering and construction firm Khatam ol-Anbia is heavily involved in Iran’s oil and gas sector. The company with about 25,000 “workers” is the largest construction organization in Iran. The company has access to government funding, a supplement of military workers and military equipment. The company was responsible for constructing the Tehran subway and controls Phases 15 and 16 of the South Pars gas field in an estimated $2 billion project.

In August 2008 the Khatem-ol Anbiya Construction Organization was sanctioned by the EU, instituting a travel ban and asset freeze. In its designation the EU stated the organization, “uses IRGC engineering resources for construction acting as prime contractor on major projects including tunneling, assessed to support the Iranian ballistic missile and nuclear programs.”[1]

The Guard annually takes in about $1billion in revenue according to a 2007 estimate, with expectations that the figure would double as President Ahmadinejad steered more business to the Guard. According to the U.S. State Department, the Guards are “taking on an increasingly influential role in Iran’s economy, with IRGC-affiliated companies winning important government contracts.”[2]

“The IRGC is so deeply entrenched in Iran’s economy and commercial enterprises, it is increasingly likely that if you are doing business with Iran, you are somehow doing business with the IRGC.” (Treasury Secretary Henry Paulson, Our National Security, CFR-NY, June 14, 2007)

On 3rd of January a news spread in social media regarding Qasem Soleimani and AbuMahdi Mohandes who has died by a US drone strike near Baghdad Airport and this was the end of their lives. In social media, especially Iranian users, there was a chaotic situation, some called of “the general of... END_OF_DOCUMENT_TOKEN_TO_BE_REPLACED