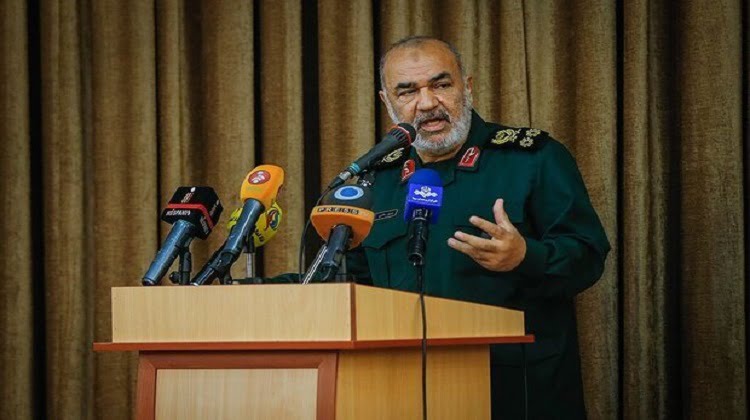 Posted By: on: July 04, 2019In: Basij, Economy, Iran Briefing Exclusive, IRGC, Slider, Who is WHO in IRGC
Print Email 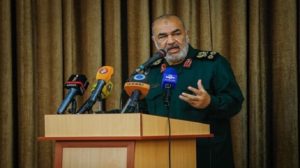 Major General Hossein Salami said the IRGC is tasked with calculating how to overcome the enemy in each and every scenario, Mehr reported.
Salami made the remarks in a meeting with commanders and personnel of the Khatam al-Anbia Construction unit.

He said the Islamic Republic is resisting against the enemy but at the same time it tries to advance and counter the enemy “Once, military action was the main focus of the enemy… but today, economic war is the main field in which the enemy encounters us,” the general said, emphasizing that Iran is currently at an intersection of global economic pressure.
Salami described the tensions between Tehran and Washington as a “war of wills”, saying that in the current situation it’s the enemy that is concerned about the outbreak of a war.
“Such concern is evident in their physical and tactical behaviors,” he added.
The remarks came weeks after the IRGC Aerospace Force shot down an intruding U.S. surveillance drone after ignoring several warnings. The United States denied that the drone intruded into Iran’s airspace at the time.
U.S. President Donald Trump later claimed he decided to call off an attack on several Iranian targets after he learned 150 Iranians would die as a result of the strike.
Commander of the IRGC Aerospace Force Amir Ali Hajizadeh said it was “impossible” for the U.S. to carry out the threat of retaliation, adding, “The Americans must mind their manners, because the era of looking down on the Iranian nation is over.”
The commander also rejected the U.S. claim that the doomed drone had not entered the Iranian airspace, saying, “Other countries have refuted the U.S. claim of not violating the Iranian border.