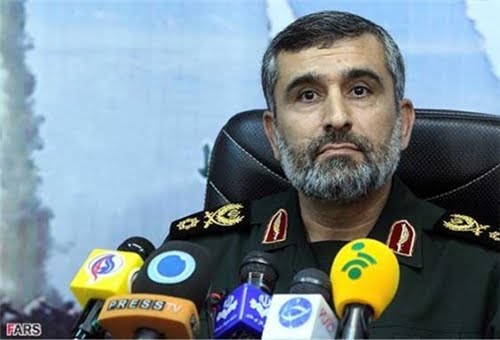 “This is an important thought presented by Supreme Leader of the Islamic Revolution (Ayatollah Seyed Ali Khamenei) and it will accelerate the Zionists’ collapse,” Hajizadeh told FNA in Tehran on Friday while participating in the International Quds Day rallies.

His remarks came after Ayatollah Khamenei strongly condemned the recent Israeli attacks on the Gaza people, and underlined that Palestinians should continue their armed struggle against Tel Aviv.

We believe the West Bank, too, should be armed just like Gaza and those who are interested in the fate of the Palestinians must work in this respect so that the pains and miseries of the Palestinian people will be decreased due to their mighty hands and the weakness of the Zionist enemy,” he underlined on Wednesday.

Hajizadeh also referred to the Palestinian resistance’s missile attacks on Gaza, and said, “The number of casualties that Israel itself declares and the destructions made show that the missiles are hitting their targets.”

He said that the number of Israeli casualties is far more than what is announced by Israel.

In relevant remarks on Saturday, Brigadier General Seyed Mohammad Baqerzadeh, the head of Iran’s committee in charge of searching for those missing in action, also said that the Zionist regime is hiding the corpses of those Israelis killed by the Palestinians’ retaliatory attacks on the occupied territories.

The Zionist regime’s casualties are gradually increasing and the regime has faced a new challenge for hiding the number of its casualties,” Baqerzadeh told FNA.

He said that reports from the occupied territories said that the Zionist regime is seeking to transfer the corpses of those killed in the Palestinians’ attacks to unknown places in the deserts near Ashkoul and Tel Aviv and in the back of ambulances which go to the two cities’ hospitals at night.

Noting that the Zionist regime is building new cemeteries in the deserts, Baqerzadeh said that the regime has obliged all the Israeli hospitals to keep the corpses of all those killed in Palestinian attacks for some days to be buried in specified places by the security forces.

His remarks came as the Palestinians have launched some 1,250 rockets into Israel by now and the Israeli news sources have strictly been banned by the regime from announcing the number of the Israelis killed in the Palestinians’ missile attacks.

Israel has been pounding the blockaded Gaza for 18 consecutive days, killing at least 825 people and injuring more than 5,500 others.

Tehran is involved in the assassination of Hariri

Iran says Taliban must have Afghan role, but can’t dominate