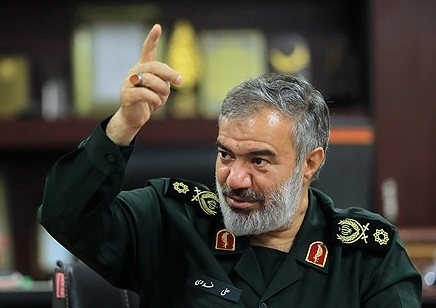 Commander of the Islamic Revolution Guards Corps (IRGC) Navy Rear Admiral Ali Fadavi said preparedness, might and power of his forces has intimidated Iran’s enemies so deeply that they do not dare to even think of adopting hostile policies against the country.

Speaking during a visit to the different parts of the specialized logistics center of the IRGC Navy in the Southern province of Fars on Saturday, Fadavi said as a result of the struggles and round-the-clock efforts made by the IRGC naval forces, “the Islamic Republic of Iran’s naval defense structure has grown so powerful that it has discouraged the enemy from even thinking about hegemony or bullying against Iran in the Persian Gulf and the Strait of Hormuz region”.

He said that the moves made by the IRGC Navy, which started in the Iraqi-imposed war (1980-1988), the war of oil tankers in the Persian Gulf and the direct confrontation with the US Navy and continued with assymetric tactics in recent years, have contributed much to Iran’s deterrence power in recent years and sow fear in the heart of the enemies.

In relevant remarks in May, Fadavi said that his forces have been drilling how to destroy US warships for the last several years, underlining that the IRGC Navy can sink a US aircraft carrier in less than a minute.

Speaking in an exclusive interview with FNA, he said the US air combat power overseas is totally dependent on the fighter jets flying from its aircraft carriers, and this has made these vessels a natural and high value target for the IRGC Navy in any possible war.

The Admiral said his forces have, thus, been conducting routine drills on how to sink US vessels in any potential combat, specially in the Persian Gulf, adding that they have gained good knowledge of the “design, construction and structure of the US warships”.

He said Iran has produced “replicas of the US aircraft carriers” for IRGC Navy drills. The Admiral, then, pointed to a CNN report in mid-March that Iran is building a replica of a US nuclear-powered aircraft carrier, and said “the US media and research centers commented on the revelation very simplemindedly”.

“They (Americans) know nothing. We have been making and sinking replicas of US destroyers, frigates and warships for long years, and we have sunk the replica of their vessels in 50 seconds through a series of operational measures,” added Fadavi.

Why Qasem Soleimani Traveled to Iraq