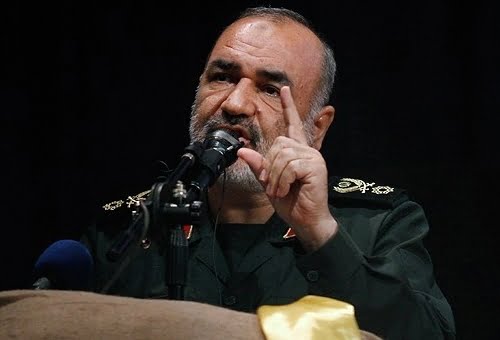 TEHRAN (FNA)- Lieutenant Commander of the Islamic Revolution Guards Corps (IRGC) Brigadier General Hossein Salami underlined that the enemies of Iran have waged a full-scale war against Iran, but in vain.

“The enemies have made many attempts to entangle the Iranian nation in poverty and hunger through economic sanctions but our nation has resisted against them,” Salami said, addressing a gathering in the Northeastern city of Mashhad on Tuesday.

He said that despite all embargos and restrictions, Iran has managed to make huge progress in different fields, including sending satellites into space and building refineries, power plants and missiles.

Salami, meantime, warned of the enemies’ cultural invasion and soft war against the nation.

Washington and its Western allies accuse Iran of trying to develop nuclear weapons under the cover of a civilian nuclear program, while they have never presented any corroborative evidence to substantiate their allegations. Iran denies the charges and insists that its nuclear program is for peaceful purposes only.

Tehran stresses that the country has always pursued a civilian path to provide power to the growing number of Iranian population, whose fossil fuel would eventually run dry.

Tehran has repeatedly said that it considers its nuclear case closed as it has come clean of International Atomic Energy Agency (IAEA)’s questions and suspicions about its past nuclear activities.