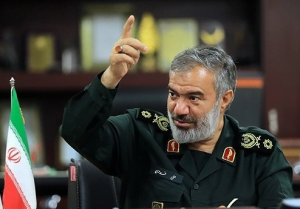 “The trend of regional developments shows that enemies’ hatred and hostility to the Islamic resistance has not decreased and has taken a new form and dimensions,” Fadavi said during a visit to the IRGC Navy units in Abu Moussa Island in the Persian Gulf on Saturday.

Stressing that the hostile goals of the enemies necessitate the IRGC and other Islamic resistance forces to strengthen their combat and defensive preparedness, he said, “Under such conditions, we have not and will not lose even one single day to maintain and boost our defensive readiness.”

The Iranian Foreign Ministry in a statement in July urged the Muslim countries to show their support for the resistance movement and the Palestinians in practical terms.

“The Resistance Movement is defending Islam in an unequal battle against the state terrorism and the apartheid regime of Israel,” part of the statement said.

The Zionist regime is making endless efforts to Judaize the Holy Quds and change the Islamic identity of Beitul-Muqaddas, it said, adding that the Palestinians are witnessing daily brutal attacks on the Muslims’ first Qibla.