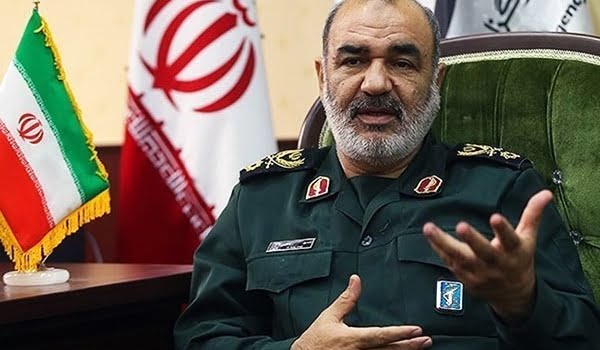 TEHRAN (FNA)- Lieutenant Commander of the Islamic Revolution Guards Corps (IRGC) Brigadier General Hossein Salami underlined the necessity for defending the Muslim territories against the enemies, and said the Gaza war is a prelude to the annihilation of the Zionist regime.

“The Gaza war is the beginning and prelude to Israel’s collapse,” Salami said, addressing a gathering in Shahriayar city, near Tehran, on Sunday night.

He stressed the regional resistance groups’ power to confront Israel, and said, “Today, the Lebanese Hezbollah enjoys such a power that it can attack all Israeli cities with heavy, non-stop missile fire.”

“Today, the enemies can no more sit kilometers away and rule the Muslim nations,” Salami said.

In relevant remarks last week, IRGC Public Relations Department Chief General Ramezan Sharif pointed to the response given by Muslim and Palestinian warriors to Israel’s savage attacks against the defenseless and oppressed people of Gaza, and said, “The quality and trend of action of the Palestinian resistance movement in recent days indicates that the defensive and offensive power of Hamas, Ezzedin Al-Qassam and Quds brigades forces have increased so much that one can dare say that all Zionists are within the range of the resistance’s missiles.”

Israel has been pounding the blockaded Gaza for 21 consecutive days, killing at least 1,062 people and injuring more than 6,000 others.