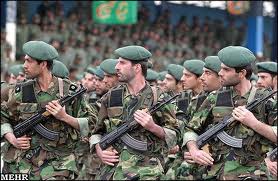 By: Amir Farshad Ebrahim
The Islamic Revolutionary Guards Corps (Sepāh e Pāsdārān e Enqelāb e Eslāmi ) formed as the first apparatus and institution in the very first days of the victorious Islamic Revolution against the Pahlavi order, at the order of Ayatollah Khomeini (the founder of the Islamic Republic in Iran).

On 2nd of April 1979, Ayatollah Khomeini officially announced the establishment of this institution to the Islamic Revolutionary Council (which also assisted in developing this institution), considering at the time that no functioning military existed or an official revolutionary guard loyal enough to carry oust (their) orders. The sensitivity and urgency of building the Revolutionary Guards meant that the leaders of the Revolution feared the old military or some remaining Pahlavi-era structures would carry out a coup d’etat against the Revolution.

Before Ayatollah Khomeini’s order, a number of armed groups were active under the direction of the Revolutionary Guards. A number of political forces under Hossein Lahooti’s command were stationed in the Shah’s Garden (former intelligence center for the Shah’s Guard). A number of other groups led by Mohammad Montazeri (Ayatollah Montazeri’s son) and Mohammad Kazem Mousavi Bojnourdi  were stationed in the Shah’s old police headquarters. Abbas Zamani (nicknamed Abu Sharif), who later became one of the first commanders of the Revolutionary Guards, also had at his disposal forces in the Jamshidieh garrisons.

However the most central and critical division of the Revolutionary Guards was stationed in the garrisons located by a street in northern Tehran known as “Saltanatabad” and this street later became famously known as “Pasdaran” because of the Guards’ post in the palace that once belonged to the Savak. Many underground freedom movements who had key representatives in the interim government also settled there.

After intense clashes of opinions and after some new revelations, the Revolutionary Council decided to combine and consolidate the armed civilian forces under the “Islamic Revolutionary Guards” banner, and in this way the Guards included youth, students, and veteran combatants from the pre-Revolution days. Furthermore, in the first Constitution (ratified December 3, 1979) and then reaffirmed in the second Constitution it was very clearly and precisely stipulated that:

The Islamic Revolution Guards Corps which was formed during the first days of the Revolution, is to be maintained so that it may continue in its role of guarding the revolution and its achievements. The scope of the duties of this corps and its areas of responsibility, in relation to the duties and areas of responsibility of the other armed forces, are to be determined by law with emphasis on brotherly cooperation and harmony among them.”(Article 150)

Little by little as the Guards found conflicts in head councils and over the appointments of members in those councils, it became involved in other crackdowns, and it was agreed that Ayatollah Khomeini choose the Commander-in-Chief of the Revolutionary Guards.

The first Commander-in-Chief of the Revolutionary Guards was Javad Mansour who used to be an old member of the National Islamic Party and the Hezbollah group; later he left the Guards to be Foreign Minister of Iran and then served as Iran’s ambassador to China. After him came Abbas Agha Zamani (famously known as “Abu Sharif”) who also used to be a member of the National Islamic Party, and was one of the founding members of the Hezbollah group in Iran years before the victory of the Revolution. For many years he served as operator for the armed intelligence combatants against the Pahlavi regime inside and outside Iran. He took the responsibility for commanding the Guards and directing its missions. He later was appointed Iran’s ambassador to Pakistan. After his return from Pakistan, he acquired some training in the hawzas in Qom and then abandoned politics, and in Pakistan earned money through free labor. For a few months also Seyed Ali Khamenei (the acting Supreme Leader of Iran) acted as Commander-in-Chief of the Guards. Mohsen Rezaee succeeded him, a young man of 28 who used to be a member of an armed combatant group that terrorized many Pahlavi police forces before the victory of the Islamic Revolution (his stay jail in is listed in his records). He served as Commander-in-Chief for eighteen years, and these eighteen years of course were the most difficult for the Islamic Republic, full of discouragements and declivities such as many foiled coup d’etats, ethnic/tribal struggles, and rebellious ideologies in different provinces of Iran, the curbing and removal of several underground/active opposition groups like the Mujahedeen Khalq Organization. The matter which truly defined the Guards was when it harbored a master plan during the Iran-Iraq war to slowly infiltrate the opposition groups’ levels of management and operations (with Guards’ members pretending to be part of an outlawed armed force), and because of its success the Guards consequently became known as a critical player in the Islamic Republic.

At the end of Mohsen Rezaee’s famous tenure as “Mohsen Nezami”, his successor Rahim Yahya Safavi was Commander-in-Chief for a period of ten years; and then Ayatollah Khamenei designated brigadier general Mohammad Ali Ja’fari (then the Guard’s ground commander) to a higher commanding position, promoting him to the rank of major general as Commander-in-Chief of the Guards.

Two other important and key structures also exist within the Guards: representation of the Vali Faqih (the Supreme Leader), and the Sazemān Hefāzat Ettelā’āt (“Bureau of Reservation of Information”, exists in parallel with and is quite influential within the Ministry of Intelligence).

The Revolutionary Guards, in addition to the offices head commander and main assistant who mediates between the forces, consists of five divisions who share similar duties: