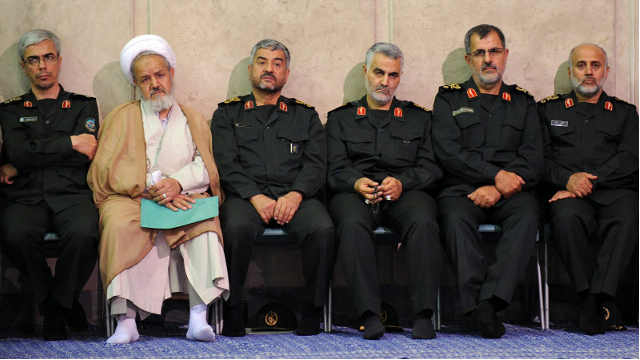 Posted By: on: September 09, 2014In: IRGC, Review Atricles
Print Email

IRGC Influence in the foreign and domestic Iranian policy – The Revolutionary Guards were created after the revolution to act as a counterbalance to the Iranian military, which Ayatollah Khomeini (the leader of the revolution) did not yet trust. Their mandate was literally to “guard the revolution”, which, as you can probably tell, is quite broad and ill-defined. At the time of the revolution, the organisation was young and inexperienced, but highly ideological and motivated, so it played a key role in crushing any opposition to the revolution and supporting Khomeini’s overall ambitions.

This support carried through to the war with Iraq in 1980, which really helped define the Guards as we know them today. While Iran’s military was in disarray from the revolution and subsequent purges, the Guards mobilised in the millions to fight on the front lines and push back invading Iraqi forces. It was a highly charged time; a blur of revolutionary fever and nationalistic sentiment.

Whether or not one supports the Guards, it cannot be denied that they sacrificed their hearts and souls for the ‘sacred defence’ (what Iranians call the war with Iraq). Hundreds of thousands of young Guards members died in the eight-year war; many more were left debilitated and mentally scarred. The war also triggered a fundamental split in the core ideals of the revolution – something I’ll refer back to later.

Anyway, by 1988 the war had ended, and post-war Iran found itself isolated and in desperate need of reconstruction. The new president, Hashemi Rafsanjani, turned to the Guards – who by now were much more organised and experienced, but lacking purpose – to help rebuild Iran’s infrastructure and economy. This was part gesture, to thank the Guards for their sacrifices, and part necessity, since Iran had no major allies and was economically devastated by the war.

The decision by Rafsanjani to involve the IRGC influence in the Iranian economy laid the foundations for the political and economic influence of the Guards today.

Throughout Rafsanjani’s presidency, the Guards slowly consolidated their influence through their involvement in the economy. But it was not until nine years later that their influence became explicit. In 1997, a new president, Mohammad Khatami, was elected on a platform of moderation and reform. Rafsanjani had been viewed as a stabilising force for Iran; a person to recover Iran from the revolution and war. Khatami, on the other hand, was more evolutionary – someone who wanted to drag Iran forward, kicking and screaming, into the modern world. This immediately caused concern within the more conservative elements of the system, in particular the Guards.

“IRGC Influence in the foreign and domestic Iranian policy”

In 1999, protests broke out across Iran after the closure of a reformist newspaper that was closely aligned to Khatami (the judiciary, which comprised of hardline opponents to Khatami, was responsible for the closure). The protests were particularly strong among universities and student groups – core constituencies of the reformist movement. Within days, Iranian security forces and the Basij clamped down on the protests, killing a number of people and committing some pretty horrendous crimes.

The problem for Khatami was that he was under intense pressure from hardliners to disown the protests, given that the protests posed an existential threat to the governing system. In particular, a letter was sent to Khatami, signed by a number of top Guards commanders, threatening to overthrow him should he not support the crackdown. This was arguably the first time that the Guards stepped into the political limelight and exercised their political weight. Coming as a shock to Khatami, he panicked and eventually disowned the protests.

Although his reputation was heavily tarnished by his handling of the situation in 1999, Khatami was re-elected in 2001. In fact, during both his elections, he received over 70% of the votes, sending shivers down the hardliners’ spine. Fearing that the reformist movement was too popular, and seeing how the protests in 1999 rocked the foundations of the ruling system, they turned on Khatami and effectively made him a lame duck until his term ended in 2005.

The 2005 presidential elections were the second time that the Guards dipped themselves into the political process. Rafsanjani, seeing what had happened to Khatami, and concerned about the influence of the hardliners, declared himself a candidate for the presidency. However, it was a relative unknown who eventually won – Mahmoud Ahmadinejad.

Immediately after the elections, Rafsanjani claimed that the Guards had manipulated the vote to allow Ahmadinejad to take power. Facing a backlash from the rest of the establishment, however, he backed down and eventually withdrew his protest.

It’s important to note that Ahmadinejad came from the same cohort of Guards who fought on the front-lines during the war with Iraq. He was the manifestation of what I said earlier about the war and its effect on the core ideals of the revolution: the Guards, having been caught up in revolutionary fever and nationalistic sentiment caused by the war, had developed their own sense of revolutionary identity, one distinct to that of the ruling clerics. In fact, many Guards members actually despised the clerical class, in particular Rafsanjani, whom they blamed for prematurely ending the war with Iraq (which they genuinely believed they were close to winning). They also saw the clerical class as corrupt and greedy.

Ahmadinejad was the first non-clerical president of post-revolution Iran. During his time in power, he completely re-shaped the political landscape of Iran, filling various political bodies with his allies from the Guards. This trend became even more prominent after Ahmadinejad’s re-election in 2009, which was heavily disputed and led to months of unrest.

Moderate forces, backed by Rafsanjani and Khatami, contested the 2009 elections via their favoured candidate, Mirhossein Mousavi. In the lead up to the elections, it was evidently clear that Mousavi had huge support among the population, if not the majority. At the same time, discontent was growing among the Guards, who were becoming more and more vocal about their opposition to a potential Mousavi victory. Eventually, it was announced that not only had Ahmadinejad won, but he had won with a landslide. Chaos ensued, and months of violent protests led to an intense crackdown, as the Guards deployed all their political, economic, and even military capital to protect Ahmadinejad’s victory.

This victory came at a cost, however (or a gain, if you look at it from the Guards’ perspective). By the end of Ahmadinejad’s second term in 2013, Guards members held key positions in government, including the ministry of oil. Something like 15% of parliamentary members were from the Guards. Ahmadeinajd also began handing out huge government contracts to Guards-affiliated companies via Iran’s supposed economic “privatisation” scheme. With his reckless rhetoric resulting in more and more international sanctions, Ahmadinejad also relied heavily upon the Guards to bypass economic restrictions. The Guards controlled a vast number of airports, sea ports, and land routes to smuggle goods in an out of the country. They also controlled a number of key financial institutions, allowing them to launder money and continue their financial support of proxies in the region.

The Guards effectively declared their intentions in the 2009 elections, and went on to display their might throughout Ahmadinejad’s reign. By the end of 2013, they were by far the biggest political and economic bloc in Iran’s byzantine governing system.

And so we reach today. It’s important to note that the moderates, again backed by Rafsanjani and Khatami, pushed back against the Guards in the 2013 elections, resulting in the victory of Hassan Rouhani, who continues to be Iran’s president today. The moderates took advantage of a number of dynamics to achieve their success: ever more restrictive economic sanctions threatening to completely destroy Iran’s economy; growing discontent among the population about corruption and international isolation; Ayatollah Khamenei’s (Iran’s supreme leader) own fears about the Guards’ power and their resentment of clerical rule; and of course the various regional wars, which have preoccupied the Guards and forced them to re-direct their political, economic, and military capital away from internal affairs.

To conclude, the Guards continue to dominate Iran’s economy, and they retain a huge amount of political influence. But various dynamics have checked their influence, and opened a door for moderate to take back some power. Where this leads in the future, however, is uncertain.