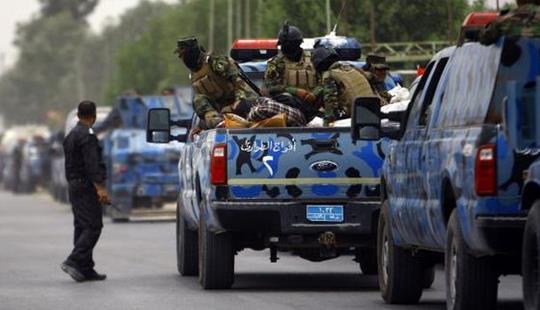 Mojahedin_Death and injury of a number of IRGC forces in Iraq

The mullahs’ regime’s Vali-e faqih (supreme leader) has ordered the Iranian Revolutionary Guards Corps (IRGC) and the terrorist Quds Force to use their commanding facilities for the suppression of the Iraqi people and protect the regime’s puppet prime minister in this country. Khamenei has said that holding a grip on Iraq is strategic for the regime’s security, and the rule of a “Shiite government” in this country plays a decisive role in the existence of the regime and that “the defeat of Maliki is a strategic defeat for the Islamic republic establishment”.

Based on these orders, Qassem Soleimani along with 200 IRGC commanders from different ranks, have stationed in Iraq to monitor from up close the development of events. They intend to coordinate and lift the morale of Maliki’s forces and organize Iraqi terrorist groups affiliated to the Iranian regime.

Moreover, 150 IRGC members from different ranks and different fields of expertise have entered this country to support Maliki’s forces in the direct suppression and killing of Iraqi people and have stationed across the country.

Many of these IRGC members have been killed and injured in the past days in Iraq. One of them is Captain Alireza Mashjari from the Quds Force, who had been dispatched to Iraq last week with a number of other Quds Force agents. In 2013, he had been dispatched to Syria and had taken part in the killing of the Syrian people. Mashjari on Thursday, 11 June fell into an ambush and was killed and the rest of his forces were injured.

His father, Mohammad Reza Mashjari, a senior IRGC commanders, is the commander of the Quds Force Saberin Brigade. On 15 June, Brigadier Hossein Hamedani, commander of the regime’s forces in Syria and IRGC member Hossein Allah Karam took part in Mashjari’s memorial ceremony at his father’s home. IRGC Brigadier Ismaeel Qaani, Deputy Quds Force Commander, and many other Quds Force agents on Tuesday, 17 June took part in the memorial ceremony that was held by the Quds Force at the Beheshti Mosque in eastern Tehran.