Is Hezbollah Preparing Itself to Fight on Behalf of Iran? 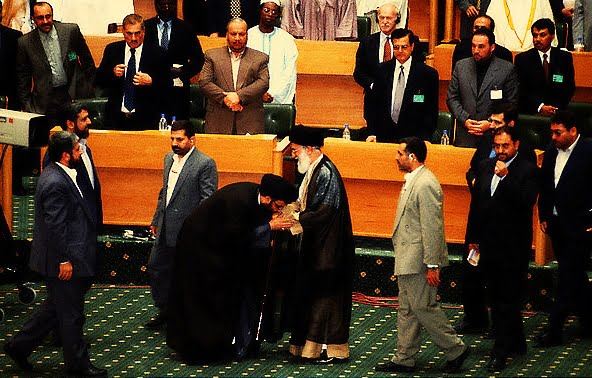 Iran Briefing : It is clear that Hezbollah, a militant group based in Lebanon, is a military wing of the Quds force of the Revolutionary Guard. Due to lack of a straight route between Iran and Lebanon, Hezbollah receives its logistic support from Tehran via Syria. Despite this fact, all three parties, Iran, Syria and Hezbollah, deny that there is an organized tie between them in funding and arming Hezbollah, and they claim that Hezbollah receives only spiritual support from Tehran.

However, with the pressures ramping up against the Islamic Republic, Iran’s Supreme Leader, Ayatollah Ali Khamenei, has recently said that Tehran has been providing Hezbollah with both spiritual and material supports. He said, “As a result of our interference, Hezbollah was able to win the 33-day and the 22-day wars with Israel.”

He was indeed alluding to the following story:

In spite of Israel’s military superiority over Hezbollah, it failed to defeat Hezbollah in the 2006 war which lasted for 33 days. The war began when Hezbollah’s forces crossed into Israel’s territory and killed three Israeli soldiers and abducted two others who were later transferred to Lebanon.

Hezbollah’s victory over the sophisticated army of Israel encouraged Khamenei to send a congratulatory message on August 16, 2006, to Sayyed Hassan Nasrollah, Secretary General of Hezbollah, who was called by Khamenei as “dear and mujahed brother.”

In his letter, Khamenei said, “What you have brought to the Islamic nations with your marvelous jihad and resistance is beyond explanation.”

The Supreme Leader was joyful because Hezbollah was regarded as a symbol of Iran’s power and strength against Israel. In other word, Hezbollah’s victory or defeat could have been considered as victory or defeat of the Islamic Republic itself.  That is why the 33-day war was called by observers as “Fighting on Behalf,” in which Hezbollah fought against Israel for 33 days on behalf of the Islamic Republic.

What has been occurring in the region that has persuaded both the Islamic Republic’s Supreme Leader and Hezbollah’s leaders to make such confessions?

Probably, recent pressures exerted by the US and its western allies on Tehran are the reasons behind the Islamic Republic’s confession.

The installation of the NATO defense shield on Turkish territory along with sanctions imposed by the US and the EU on Iran’s Central Bank and oil sector were compelling enough for the Islamic Republic to show off its military strength.

Iran’s Supreme Leader, Ayatollah Ali Khamenei, long ago proclaimed the Threat-with-Threat strategy as the Containment strategy. He had stated that “We are not a nation to sit back and watch the materialistic, corrupted and rotten powers threaten the strong and dignified Iranian nation. We will threaten as a response to any threat.”

Since the containment strategy, i.e., the closure of the Strait of Hormoz, opted by the regime, was more a defensive reaction that offensive one, recent statements made by the Supreme Leader of Iran regarding the Islamic Republic’s all-out support of Hezbollah, must be regarded as a show of the Islamic Republic’s offensive capabilities which can go even beyond its borders. The Islamic Republic wanted to show that, in addition to closing the Strait of Hormoz, it has the ability to fight with Israel in southern borders of Lebanon in spite of the presence of the NATO defense shield which might be disturbing to the regime in Tehran.

In November 2011, Hassan Nasrollah warned the US and Israel that war against either Iran or Syria would not be limited to these two countries, and it would have the potential to spread across the region. However, Nasrollah’s recent remark, in which he had lauded the Islamic Republic’s military power and its supreme leader, who was described by Nasrollah as an outstanding leader who replies a strike with two, must be interpreted in line with the Islamic Republic’s offensive strategy and reaction.

Hassan Nasrollah himself has answered the question. He has said that “the Islamic Republic’s leaders will not ask for Hezbollah’s help, should its nuclear infrastructures be attacked. We ourselves have to decide how and what to react.”

Regardless whether the Islamic Republic would seek help from Hamas in case it is attacked by Israel, what would be Hamas’ position and what decision it is going to make?

The question is important, keeping in mind the fact that Hamas has defined itself as a resistance movement which is tasked with liberation of the occupied territories, and not military wing of a foreign country.

Therefore, it is against the core values of Hamas, should it fight against Israel on behalf of Iran. In case Hamas refuses to fight on behalf of Iran, it would leave Iran, a very significant financial source for Hamas, alone in the life and death situation. It seems that Hamas will opt for the second option, and it will decide not to fight on behalf of the Islamic Republic. Because today it is very much known that the Quds force is not at all concerned about liberating the occupied territories, but it is looking for a bulwark against the Israel’s possible aggression. Hamas in Lebanon is assigned to play this role for the Quds force.