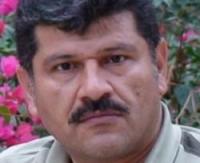 Ahmadi Amouyi was arrested in the wake of Iran’s controversial 2009 presidential election, which triggered mass demonstrations over allegations of vote fraud. Both he and his wife, the prominent Iranian journalist Jila Bani-Yaghoub, were arrested at their home.

Ahmadi Amouyi has been sentenced to five years in prison and over the past year he has been allowed no visits with family members.

The jailed journalist had contributed to several reformist newspapers. At the time of his arrest, he was the director of Sarmayeh newspaper and the editor-in-chief of Khordad-e No website.

The Hellman-Hammet grants, administered by Human Rights Watch, are given annually to writers from around the world who are deemed to be the target of political persecution. It was set up by Lillian Hellman, inspired by the persecution she and her longtime companion Dashiell Hammett experienced during the anti-communist hysteria of the 1950s in the US. Both writers were questioned by U.S. congressional committees about their political beliefs and affiliations. Hellman was blacklisted and had trouble finding work, and Hammett had spent time in prison.

Several Iranian writers and journalists have been previous recipients of the Hellman-Hammett grants.