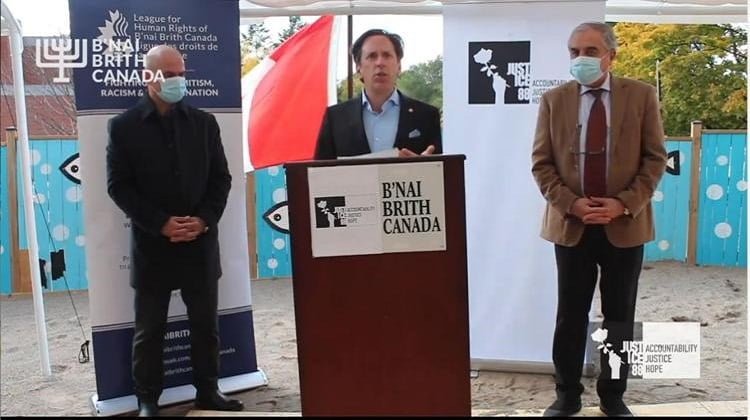 B’nai Brith Canada and the Iranian human rights group Justice 88 hosted a virtual ceremony Thursday night to reaffirm solidarity between the Jewish and Iranian communities, and demand stronger action against the Iranian regime by the Trudeau government.

On hand were B’nai Brith Canada CEO Michael Mostyn, Justice 88 Campaign chairman Reza Banai and Shahin Moghaddam, whose wife and 10-year-old son were on the Ukraine International Airlines Flight 752 that was shot down by the Islamic Revolutionary Guard Corps (IRGC) earlier this year in retaliation for the U.S. killing of the IRGC leader Qasem Soleimani.

The three urged Canadians to sign a petition calling for stronger action against Iranian regime brutality and its threat to the world.

“We urge you to contact your politicians, let the government of Canada know that we need to do something to keep Canada safe from the Iranian regime,” Mostyn said. “This petition will be circulated from all of our websites (bnaibrith.ca, justice88.com) and we encourage you to sign it and take action.”

• That the federal government “comply with the House of Commons Conservative motion passed in 2018 to designate the entirety of the IRGC as a terrorist organization.”

• The application of Canada’s version of the Magnitsky Act to Iranian officials.” The act sanctions those considered to be human rights offenders, freezes their assets in the country which applies the act and bans them from entering that country.

•For “full transparency, justice and accountability and compensation for the families of the victims of the shooting down of Ukrainian international flight 752.”

Filled with emotion, Moghaddam pointed out that the Iranian regime continues to persecute and threaten the families of the victims.

Read more at: The Sub Urban