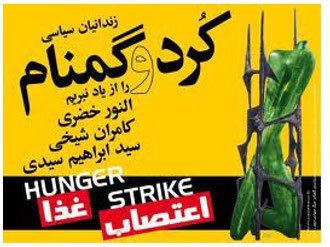 According to a report by Kalame News, Anvar Khezri began his hunger strike forty days ago to protest against the conditions under which he has been locked up in Rajai-Shahr Prison, Ward 6, Hall 18. Since two years ago when he was arrested, Anvar Khezri has been in a state of limbo without any formal charges or a trial. Additionally, he hasn’t even been interrogated.

To protest against the uncertainty surrounding his case and also having been locked up amongst ordinary inmates in Rajai-Shahr Prison, Anvar Khezri continues his hunger strike. He refuses to eat any food and only drinks water and tea.

Anvar Khezri has two main demands. First, he has requested to be formally charged and tried after being in a legal limbo behind bars for two years. Second, he has demanded to be transferred to the ward housing political prisoners.

Two other Kurdish political prisoners, Kamran Shakhi and Ebrahim Seyedi, were also on hunger strike but ended it a few days ago.

Iran: 25 people executed in one week