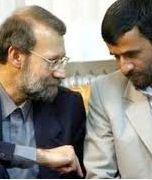 Following the remarks by Iran’s supreme leader on the need for greater coordination among the three branches of government, the head of the country’s parliament, the Majlis, announced that he had written a letter to ayatollah Khamenei complaining about Mahmoud Ahmadinejad’s actions.

According to Fars news agency – a group close to the Revolutionary Guards – the letter is about the 2nd phase of the controversial subsidies program. No further details were provided by the news agency.

Larijani had earlier said on the Majlis floor that the government’s recent efforts in paying out new subsidies were “not compatible with the current conditions in the country, aside being expressly unlawful, and they would further deepen inflation in the country.” He also said that they would not help the unemployment problem, and added, “The Majlis cannot agree with programs that have not been prepared by specialists which will create hurricane of inflation, such as those that took place during the last few months and took away from people’s wealth” because “a proper implementation of the subsidies law along with some other problems in the allocation of banking facilities to the industries of the country have hurt production.”

The Speaker’s remarks came after Mahmoud Ahmadinejad had announced that targeted subsidies would continue “in the same manner as before” and added, “The next step in implementing the targeted subsidies are ready for implementation and all responsible authorities and governor generals must be ready to fully implement this phase” of the plan in the best possible way.

In a related development, the Jomhurie Eslami newspaper accused Ahmadinejad of engaging in four unlawful acts in recent days. “In the short span of 12 days, the d government has taken four unlawful actions which are: the head of the government refraining from responding to Majlis representatives questions; the appointment of the first defender in the Kahrizak prison to head the social welfare organization; adding to the subsidies without receiving authorization from Majlis, and; removing individuals from receiving subsidies without getting their approval first,” it wrote. Jomhurie Eslami is a hardline newspaper closely associated with the supreme leader, ayatollah Khamenei.