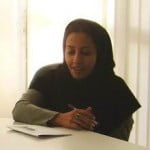 Bahreman was detained for the charge of acting against national security. Her house was searched for 3 hours following her arrest and some of her personal belongings were confiscated. After 71 days of detention, no logical reason for her arrest has been declared.

She was transferred to Shiraz Intelligence Ministry after her arrest and after 55 days of solitary confinement,she was trasnfererd to a cell in Shiraz Prison where she is held with one other inmate.

Maryam Bahreman is a member of the One Million Signatures Campaign and was also a founding member of Pars Women’s Organization (Sazman-e Zanan Pars).