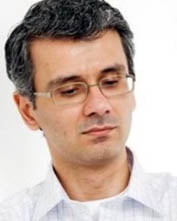 On Saturday April 21 literary translator and IT specialist Mohamad Soleimaninia on his day 17 of hunger strike was transferred from Intelligence Ministry’s Ward 209 to General Public Ward 305 in Evin prison. He continues to be on hunger strike.

Soleimaninia was arrested on January 10, 2012 on charges of developing illegal social networking websites and with cooperation with enemy states. At the time of arrest he managed a number of social networking Internet sites.

This IT specialist and literary translator has been incarcerated without formally being charged. He was placed in solitary confinement for days. During his interrogations, he suffered harsh treatment, severe beatings and was threatened many times by the interrogators.

During interrogation period and while in solitary confinement, he was deprived of time outside of his cell, deprived of visit and phone calls, all for the purpose of obtaining false confession from him.