Mansour Osanloo back in prison despite serious illness; no phone contact with family 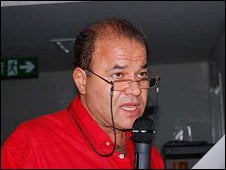 Mansour Osanloo, the imprisoned founding member of the Syndicate of Tehran and Suburbs Bus Company (Sherkat-e Vahed), who had been hospitalized for the past few days for his heart condition was returned to prison again on Saturday, 21 May, despite his dire condition. “Because prison conditions are dangerous for Mansour’s health, I tried very hard through the Prosecutor’s office to have him come back home from the hospital, and to remain under house arrest [instead]. I even offered to look after the forces [watching Osanloo], just so that Mansour would return home, because according to his doctors’ diagnosis, he must be on a proper diet, eat fruits and vegetables, and stay in a stress-free environment. None of these would happen in prison,” Parvaneh Osanloo, wife of the labor activist, told the International Campaign for Human Rights in Iran.

“I talked a lot on the phone with the Office Manager at the Prisons Organization, but, unfortunately, I neither heard a positive nor a negative answer, and on Saturday he was returned to prison,” said Parvaneh, regarding her request on behalf of Mansour. “He was hospitalized on 1 May, but ultimately the medical team decided that he should receive heart physiotherapy and drug treatment, because open heart surgery at his age and in his condition is very dangerous and it will be a lot harder for him to be in prison post-surgery”.

“Since Saturday when, despite my efforts, Mansour was returned to prison, we have not heard any news from him because the prison phones are disconnected. I’m requesting his quick release. The doctors have determined that he needs a stress-free environment and continuous treatment. He also needs to see his physician regularly so his medications are controlled. Worst of all is that because the telephone is disconnected, the authorities should at least maintain contact with us, so that we can learn about our loved ones’ conditions,” added Parvaneh.

Mansour Osanloo was arrested by security forces near his house in March 2007. After his trial on charges of “acting against national security” and “propagating against the regime,” he was sentenced to five years in prison. He is currently in Rajaee Shahr Prison in Karaj. Due to clogged arteries, the Medical Examiner has voted three times for an end to Osanloo’s prison term, but the judicial authorities have not reacted to this observation. He has been hospitalized several times during his prison term, most recently at a private hospital in Tehran on 1 May, though he was returned to prison after 20 days. (International Campaign for Human Rights in Iran – May 25, 2011)