Posted By: crazydeadon: May 16, 2011In: Human Rights, Tortures
Print Email 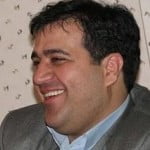 The families of a number of Iranian political prisoners have expressed grave concern over the well-being of Mehdi Mahmoudian, a jailed journalist who is on a dry hunger strike.

He is currently in poor physical condition.

Mahmoudian had written a letter to Ayatollah Khamenei, Iran’s Supreme Leader, that reveals the “prevalence of sexual abuse in prison.” That letter, which was published last week on the Kaleme website, percipitated Mahmoudian’s transfer to 10 days of solitary confinement and the withdrawal of his visiting privileges for three months, Kaleme reports.

Mahmoudian has reportedly started a hunger strike since his transfer to solitary confinement.

Mahmoudian was arrested last year in the post-election crackdown on the opposition. He has been sentenced to five years in prison for the charge of “assembly against the regime.”

Vahid Lalipour arrested and serving his one-year sentence behind bars

45 years of prison for 5 political activists

What Are Iranian Special Forces Doing In Syria?