The IRGC and Department of Defense’s missile exercise, a threat to the world’s agreement

Aug 19, 2015 Iran Briefing Exclusive, IRGC News, Politics, Slider Comments Off on The IRGC and Department of Defense’s missile exercise, a threat to the world’s agreement 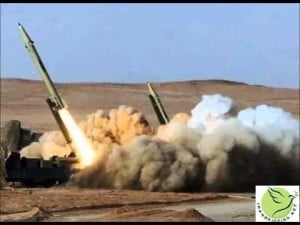 The IRGC and Department of Defense’s missile exercise

Iran briefing- In the most recent confrontations against Iran’s nuclear deal with the 3+3countries by the Iranian Revolutionary Guard and its led forces in the Iranian parliament,204members ofthe Representativesissued astatement tothe major-general Hasan Firoozabadi, thechief of Staff of the Armed Forces, demanded for holding the missile exercises.

People’s representatives in the “House of Public”, (parliament),issued a letter stating that ” Based on the president’s emphasis, the statement of the Ministryof Foreign Affairs andalso thenegotiator’s remarks, the factthat” theresolutionis notlegally binding” should benoticed seriously and like always show the powerand authority ofthe armed forcesto everyone so that the other dissidents’ concerns would be practically removed.” At the end of this statement they also requested”to execute the predicted and adopted Missile exercise by the Revolutionary Guard andthe Ministry of Defense on time.” The fact that the representatives issued this statement while Iran’s government is getting ready to make the nuclear deal in order to gain other countries trust, is nothing butcompassionforthe continuity ofinspectionreportsbymilitary andlawbackgroundin order to continue the interferingin the affairs ofother countries. missile exercise  missile exercise  missile exercise missile exercise

In June, the representatives adopted a plan with 213 votes, based on its secondbylawof Article three, indicating that the foreign minister is required to report the implement of the agreement to the Parliament every 6 months, andNational Security Committee of Parliament, have to provide a report on the enforcement of agreements to the Members of Parliament every 6 months. Recently, after less than two months, the members of Parliament have asked the government to give the agreement as a bill to the parliament in order to be reviewed, as well as that they said thatany voluntary act on beginning temporary, permanent or obligatory implementation is not “legal basis” prior to the approval by Parliament and the Guardian Council confirmation.In fact, after the speech of “Ahmad Jannati”, the Secretary of the Guardian Council of the Islamic Republic in Tehran, on Friday Prayers sermons,the representatives who fifty days ago had approved the “legislation” referred their case to the Supreme National Security Council: “We must respect the decisions of the Supreme National Security Council.”, now they are trying to stay in the remaining opportunity until starting the implementation in order to make obstructions on the process of its implementation by the government. He had said: “In my opinion, this is the kind of agreement that should be approved in the parliament, in this way the government should provide the legislation.”

In the early days of the agreement, the leader of the Islamic Republic of Iran announced in the Eid al-Fitr sermon: “With this negotiation and provided text, there will not be any changes in our policy against the U.S. arrogant state, the U.S.’s policies in the region is totally different from the Islamic Republic policies. “He explicitly supported the” Hezbollah in Lebanon ” and continued:” The U.S. accuses the Hezbollah in Lebanon of terrorism, this is highly injustice, In contrast, the Israel’s rulers who murder the kids are supported by the state, so how to negotiate and reach an agreement with this kind of state? “These Threatening words in the first days were interpreted by the political and foreign experts as “domestic consumption for the fans”, however it should not be forgotten his previous statements and obstructions about the negotiations after the Saad Abad agreement in 2003 and also the last 12 years.In fact, the most serious threat is about the non-implementation of the agreement and the possibility of war in the region by Israel and the U.S. Republicans; in contrast the Leader and the subordinate armies also have the sufficient capacity to disturb the peace.

The Iranian people have touched the effects and the consequence of the sanctions that is going to be removed step by step by the implementation of the agreement, deeply with their flesh and blood. There were not least victims of this nuclear mutiny in Iran; the patients with specific disease, suffered from the lack of medicines due to the dedication of drug currency to luxury items such as luxury cars imported into the country in order to nullify the sanctions to the country and have the benefit of the sanctions. The sanction of the brake linings for vehicles that have dual applications must be mentioned as the smallest impacts and followed by noticing the accidents in Iran’s roads. It is strange thatin this conditions that the people are waiting to feel the step by step effects of the sanction removal on their life, thepolicy of hostility to the world is strongly continued by the leader, the military and the subordinated representatives.

On 3rd of January a news spread in social media regarding Qasem Soleimani and AbuMahdi Mohandes who has died by a US drone strike near Baghdad Airport and this was the end of their lives. In social media, especially Iranian users, there was a chaotic situation, some called of “the general of... END_OF_DOCUMENT_TOKEN_TO_BE_REPLACED