Mohammad Ali Amoori, who sentenced to death, deprived to meet his lawyer 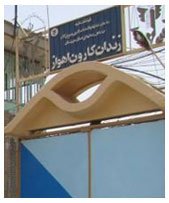 According to a report, while Dr. Ehsan Mo’azedi was going to meet his client Mohammad

Branch 32 of supreme court under the administration of judge Reza Farajollahi and the other judges including Qaem Maqami and Lotfi, informed the death verdict of Mohammad Ali Amoorinezhad, Hadi Rashedi, Hashem Sha’baninezhad, Mokhtar Alboshokeh and Yabar Alboshokeh to their lawyers.

Banning their visit is considered by the prison officials without any reason and until now nobody is responder to the prisoners objection.

Iran snipers in Syria as part of crackdown