Mohammad and Abdullah Fathi Executed in Esfahan for Enmity with God

Posted By: crazydeadon: May 17, 2011In: Executions, Human Rights
Print Email 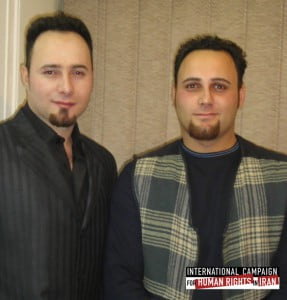 HRANA News Agency – Mohammad and Abdullah Fathi were hanged in Esfahan prison on Tuesday morning, May 17, 2011.

According to a report by Human Rights Activists News Agency (HRANA), in early morning hours, the two brothers who were 27 and 28 years old were hanged in Esfahan’s Dastgerd prison while a group of people together with the Fathi family gathered outside since the night before to ask for the verdict to be repealed.

Mohammad and Abdullah Fathi were charged with the crime known as Moharebeh [Waging War Against God] through armed robbery and organizing an illegal group against the Islamic Republic regime.  The two brothers had confused to their crimes as a result of being tortured for a long time.

On March 28, 2010, seven individuals were arrested by law enforcement officers in Chalus (Mazandaran Province) and were subsequently transferred to Esfahan.  These seven individuals have been identified to be Mohammad and Abdullah Fathi (son of Bijan), Davood Jamshidian (son of Mohammad Reza), Saied Javanmardi (son of Yadollah), Mohsen Goudarzi (son of Lotfollah), Daniel Amiryavary (son of Mohammad Reza), and Ibrahim Javanmardi (son of Reza).

Judge Moghazi presided over Esfahan’s Revolutionary Court, Branch 24, in a trial which lasted two hours and sentenced the aforementioned individuals to death.  After the cases were referred to the higher court, the Supreme Court judges announced that the maximum penalty for each individual should have been seven to fifteen years in prison.  Accordingly, the death sentences for five of these individuals were repealed.  However, Mohammad and Abdullah Fathi’s punishment was not reversed, and their family was notified by the officials who said, “The order has come from the above that these two must be executed.”

Bijan Fathi, Mohammad and Abdullah Fathi’s father, in an interview with HRANA pointed out that their home was near the front lines during the Iran-Iraq war in the 80’s and mentioned, “My sons suffered from neurological disorders because of bombings and explosions.  Mohammed developed stuttering, and Abdullah didn’t begin talking until he was three years old.  From 1986, they were receiving psychological counseling and treatment, and four years ago, their treatment began again.  The records are still kept by their doctor.  Consequently, they either aren’t capable of committing such crimes or are not in control of their actions.”

Bijan Fathi added, “My sons’ medical records have been sent to the court, but unfortunately, no one has bothered to conduct an investigation by referring the records to the medical examiner.  They have just said that they want to execute these two individuals.”