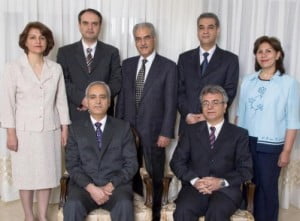 It has been three years since seven Bahá’í leaders in Iran were incarcerated because of their religious beliefs. They suffered a sham trial and are now enduring appalling conditions in prison. Two are women and their lives are in danger.

The Bahá’ís are Iran’s largest religious minority, with over 300,000 believers, and for 30 years they have suffered a state-sponsored campaign of persecution. Hundreds have been executed, thousands tortured and imprisoned, and many others denied homes, livelihoods or education.

The United Nations human rights council recently established a special rapporteur to study the human rights situation of Iran – an achievement that owes much to the British government. Iran uses the cover of other events to press its campaign against Bahá’ís and others.

The international community must remember the Bahá’ís in Iran. The foreign secretary, William Hague, has condemned the 20-year sentences of these seven innocent people. The prime minister, David Cameron, has said that he is “deeply concerned about the ongoing plight of the seven Bahá’í leaders and the continued attacks on the Bahá’í Faith in Iran”.

We call on Iran to respect the rights of all its citizens, and to release the seven Bahá’ís. In a time of great change across the Middle East and north Africa, the plight of the Bahá’ís cannot be forgotten.