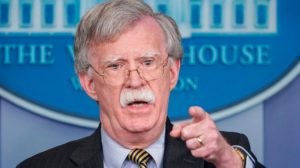 The council, under national security adviser John Bolton, made the request after militants aligned with Iran fired three mortar rounds into the diplomatic section of Baghdad, which includes the U.S. Embassy, according to the report. The mortars landed in a vacant lot, and no one was injured.

The Journal reported that the Pentagon developed plans for a strike on Iran in response to the National Security Council request, but it is unclear whether those plans were shared with the White House or Trump.

Unnamed sources told the Journal that the request raised alarm within the Defense and State Departments.

“It definitely rattled people,” a former senior administration official told the newspaper. “People were shocked. It was mind-boggling how cavalier they were about hitting Iran.”

A current senior administration official disputed that characterization, telling USA TODAY that the Pentagon and State Department were not “caught off guard.”

NSC spokesman Garrett Marquis said in a statement that the council “provides the president with options to anticipate and respond to a variety of threats.”

“We continue to review the status of our personnel following attempted attacks on our embassy in Baghdad and our Basra consulate, and we will consider a full range of options to preserve their safety and our interests,” Marquis said.

Secretary of State Mike Pompeo declined to comment on the report when asked about it during a news conference in Qatar.

Former U.S. officials told the Journal “it was unnerving that the National Security Council asked for far-reaching military options to strike Iran in response to attacks that caused little damage and no injuries.”

Bolton has long backed a more aggressive U.S. policy toward Iran. He was a strong proponent of pulling out of the Obama administration-era deal in which Iran agreed to pause its nuclear weapons program in exchange for a reduction in sanctions.

Not long after the mortar attack that riled the National Security Council, Bolton warned the Iranians that “if you cross us, our allies or our partners; if you harm our citizens; if you continue to lie, cheat and deceive, yes, there will indeed be hell to pay.”

On 3rd of January a news spread in social media regarding Qasem Soleimani and AbuMahdi Mohandes who has died by a US drone strike near Baghdad Airport and this was the end of their lives. In social media, especially Iranian users, there was a chaotic situation, some called of “the general of... END_OF_DOCUMENT_TOKEN_TO_BE_REPLACED