Israeli Prime Minister Benjamin Netanyahu warned Sunday that Iran is planning more attacks against Israel and the Israel Defense Forces (IDF) are working hard to prepare and protect the country from harm. 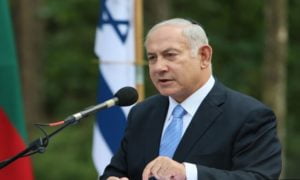 “Iran’s aggression in our region, and against us, continues,” Netanyahu said while meeting with IDF commanders on Mt. Avital in Israel’s north.

“We are taking all necessary actions to prevent Iran from entrenching here in our region. This includes the activity necessary to thwart the transfer of lethal weaponry from Iran to Syria, whether by air or overland. We will also take action to thwart Iran’s effort to turn Iraq and Yemen into bases for launching rockets and missiles against the State of Israel. Our commitment and our readiness to struggle against Iranian aggression is absolute and we are acting with all means to prevent Iran from achieving its goals. I cannot go into more detail but this is a constant process,” the prime minister said.

Netanyahu said Israel would confront Iran anywhere in the Middle East and criticized the Islamic Republic for killing protesters who are demonstrating against the regime.

“The leaders of Iran are concentrating on the citizens of Iran; they are slaughtering them. This is additional testimony to what kind of a regime this is. We will oppose it everywhere,” he said.

Last week, the IDF struck dozens of Iranian targets in Syria in response to four rockets that were launched at the Golan Heights on Tuesday.

“The attack was carried out in response to the launching of the rockets by the Iranian Quds force from Syrian territory,” the military said in a statement.

The Iranian Quds force is a unit in the Iranian Revolutionary Guard Corps responsible for operations outside of Iran’s territory.

Israel has conducted many airstrikes in Syria over the years to prevent Iran from gaining power there.

Iran turns the screws on dissidents ahead of elections, report finds

US: Iran ‘most active state sponsor of terrorism’