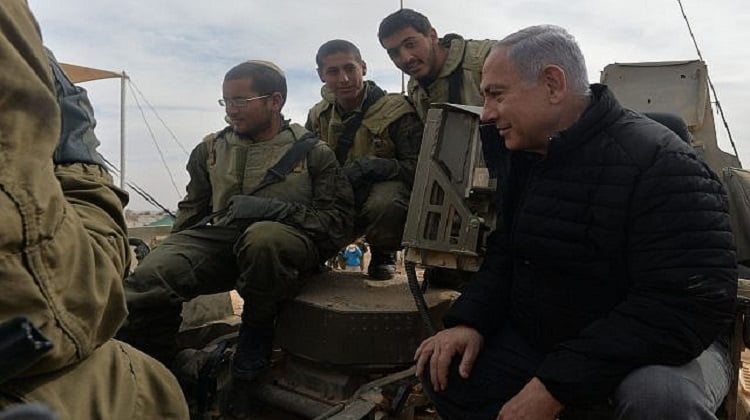 Prime Minister Benjamin Netanyahu on Wednesday threatened the Gaza Strip after an escalation of violence on the border, saying that Israel was ready for all possible scenarios.

Maybe there is someone in Gaza who thinks they can raise their head, but I suggest they understand that the response will be serious and very painful. We are prepared for every scenario and every escalation,” he told soldiers during a visit to the Shizafon army base in the south of the country.

Netanyahu, who also serves as defense minister, also threatened Iran and vowed to fight the country’s forces in Syria.

“Iran is the main enemy, and has declared its intention to destroy us with nuclear weapons, which we are committed to thwarting,” he said. “But Iran is also building forces around us, and they have established a front in Lebanon through Hezbollah, and they have established a southern fortress in Gaza, which is maintained by Hamas and Islamic Jihad.

“And now they wish to build a third fortress in the Golan Heights, based on the establishment of the Iranian military. We are committed to fighting all these things and to fighting the Iranian army in Syria.”

On Sunday, Israel reportedly conducted a rare daylight missile attack on Iranian targets in Syria. In response, Iran fired a surface-to-surface missile at the northern Golan Heights, which was intercepted by the Iron Dome missile defense system over the Hermon ski resort, according to the Israel Defense Forces.

Netanyahu’s speech also came after the Israeli Air Force launched airstrikes against multiple Hamas targets in the northern Gaza Strip on Tuesday night, following two border clashes earlier in the day, including one in which a sniper shot an IDF officer in his helmet, causing light injuries, the army said.

Iran: Arrests at funeral of activists in Khoy, West Azerbaijan

Iran Prepares For War With Israel

If the US wants undermine Iran’s security, no one will have security