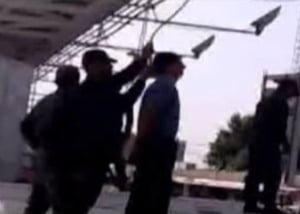 Graphic new video footage of a public hanging in Iran this week highlights the brutalisation of both the condemned and those who watch executions, Amnesty International said today.

The video provided to Amnesty International was shot on 19 July, and shows the execution by hanging of three men in Azadi Square in the city of Kermanshah.  The men had been convicted of rape.

The three men are shown standing on top of buses as guards drape ropes fixed to a bridge overhead around their necks, before a crowd of onlookers including children.

The crimes for which the men were condemned and the execution is announced over a loudspeaker, then the buses are driven away.

In the video, numerous people are seen photographing or filming the execution.

“Not only those executed, but all those who watch public executions, including, children, are brutalised and degraded by the experience.  These public displays of killing perpetuate a culture of acceptance of violence and bloodlust, rather than a belief in justice,” said Hassiba Hadj Sahraoui.

“We have also been informed that the arrest, trial and execution of these men took barely two months, which raises serious questions about the fairness of the trial.”

Tuesday’s hangings are part of a continuing rise in the number of public executions in Iran since late 2010, and a rise in executions overall.

“It is deeply disturbing that despite a moratorium on public executions ordered in 2008, the Iranian authorities are once again resorting to this inhuman practice.” said Hassiba Hadj Sahraoui.

According to UN human rights experts, executions in public serve no legitimate purpose and only increase the cruel, inhuman and degrading nature of this punishment.

“All executions violate the right to life. Those carried out publicly are a gross affront to human dignity which cannot be tolerated,” said Hassiba Hadj Sahraoui.

The executions follow several widely publicized gang rapes of women this year in Iran. In some cases, officials blamed the victims for failing to adhere to the official code on dress or gender segregation.

“Executions after speedy unfair trials are no solution to the extremely serious problem of rape in Iran, which feeds on the acceptance of violence against women at all levels of society,” said Hassiba Hadj Sahraoui.

“The Iranian authorities should be aiming to combat this culture of violence rather than perpetuate it through these public displays of brutality.”

Iran comes second only to China in the number of executions carried out annually.  The Iranian authorities do not publish official statistics on their use of the death penalty, despite repeated calls for transparency by UN human rights bodies.

UN guidelines on the use of the death penalty, in those countries that retain this punishment, state that it should only be used for the most serious crimes. This is understood as meaning intentional crimes with lethal or other extremely grave consequences.  Most executions in Iran relate to drug-trafficking offences and rape.