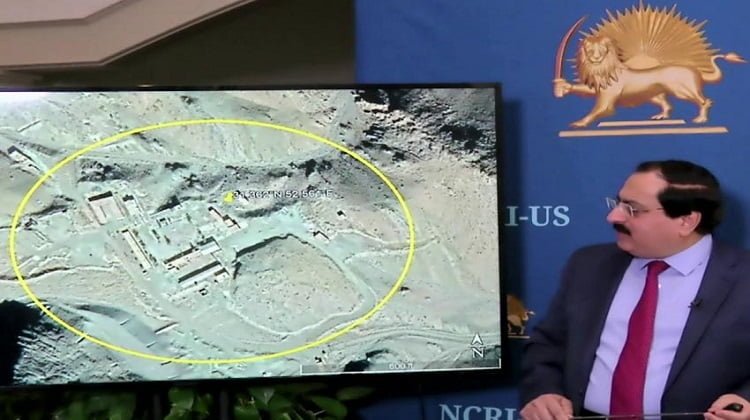 NCRI in a Press Conference in Washington D.C. reveals that construction of the site began in 2012, three years before the US, under President Obama.

The National Council of Resistance of Iran’s (NCRI) United States representative office in a press conference on Friday revealed details of the Iranian regime’s new centers to continue nuclear activities. In addition, the NCRI revealed the regime’s attempts for destroying all the evidence of their nuclear activities.

According to the NCRI, new information received from sources within the Iranian regime reveals that a new center has been built to continue its work for weaponization of the Iranian regime’s nuclear program. The Organization of Defensive Innovation and Research (Sazman-e Pazhouheshhaye Novin-e Defa’i), known by its Persian acronym SPND, is the institution within the Ministry of Defense pursuing this project. The Ministry of Defense is heavily controlled by the IRGC.

Soona Samsami, the representative of the NCRI U.S., opened the conference and by emphasizing that the Iranian regime has taken advantage of the Iran nuclear deal, JCPOA, to covertly continue the building of its nuclear weapons, said: “The appeasement policy of west allowed the regime to accelerate its drive to obtain nuclear weapons while negotiating with world powers. Obtaining nuclear weapons is part and parcel to the mullahs’ strategy for survival.”

Mr. Alireza Jafarzadeh, NCRI-US office deputy director, during this conference, revealed: “According to top-secret intelligence obtained by the network inside Iran of the People’s Mojahedin Organization of Iran, (PMOI/MEK) from within the regime, SPND has continued its work following the JCPOA. The structure and the personnel of SPND remain intact and part of the institution has been expanded. Brig. Gen. Mohsen Fakhrizadeh Mahabadi continues to remain the head of this organ. Thus, the JCOPA notwithstanding, the Ministry of Defense and the IRGC have maintained their capabilities to build a nuclear weapon.”