Acourt in Nigeria has sentenced an alleged member of Iran’s Islamic Revolutionary Guards Corps to five years in prison for arms smuggling. 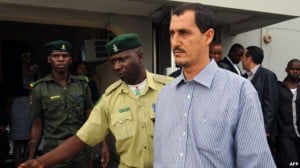 The two men were detained in 2010 at the Lagos port after officials found that 13 containers labeled as construction materials actually contained mortars, rifle ammunition, and other weaponry.

Aghajani was added to a UN blacklist last year as a Revolutionary Guards member tied to Iranian support for terrorism.

He has also been listed by the United States. Aghajani denies any association with the Revolutionary Guards and insists he was in Nigeria as a private businessman.