On the Pretext of Hossein Derakhshan’s Sentence 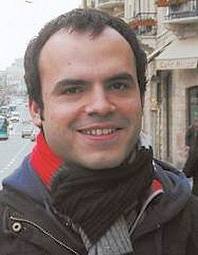 I write this piece on the occasion of Hossein Derakhshan’s 19.5-year prison sentence; a young man who these days sits in a solitary confinement cell biting his nails (and I have heard he has bitten them all off) and is “not doing well at all.”
But this event is really a pretext for me to say that for years you – the men in power in Iran – have been subjecting us to the worst in order for us to be content with the least. What is going on today  is similar to what was happening in the 1980s when we were happy that prisoners in Iran were going through choleric years, and were not hanged, without ever asking ourselves: for what a price? But then what do you expect from a nation which has for years been living under the fear of executions and where the top news has always been the pulling of a chair from under a prisoners’ feet?

Those were the 1980s. After a long period of limbo, they eventually took my husband to the court and we expected a sentence. Finally when the visiting day came, I sat in Evin prison wearing that black chador (veil) which seemed to carry all of Evin prison’s dirt and blood, while its humiliation would never leave, waiting for my turn to see my husband. Amid the murmurs of spouses, the cries of infants and the heavy and shocking look of mothers, I paved my way towards the cabin where my husband awaited me. When I saw the look on his face it looked like the sentence of death: yellow and in pieces. He only had the strength to say: Maximum punishment.

I froze. Then there was silence and more silence. I was holding on to the wall next to me while my other hand rested against the glass window that separated us; the window that for a moment turned into the line that separated being from non-existence. But his hand was steady. The whole visit passed like this. Then they took him away and I too …. No. Nobody took me anywhere. I did not leave. I was just gone.

I had turned into a robot. I could neither hear any sound, nor see anything, nor sense any feelings. I just went on. I went and dragged the chador on the floor and clung to its half that was still on me. I just moved.

“Where are you?” she asked. I did not know. “What happened?” I did not know. Finally she shouted, “Give the phone to anyone around there.” Again like a robot, I opened the telephone booth. I held the telephone handle facing out and said, “Take it.” A couple passers by were confused and scared, they looked and changed their path. Eventually someone took the handle. I could see that he was saying something to the telephone. Then he grabbed a corner of the chador and pulled me out, and made me sit next to a wall. From all that he said, I only heard this: “Sit down and do not move.”

My friend arrived minutes later. Got out of the car disheveled. Held me in her arms, and I turned into a melting ice under the kindness of the sun. Friendship. And I cried. Someone had died inside of me. Someone who never came to life again.

The story of that “maximum punishment,” its commute to 15 years later and finally freedom after six years is a book unto itself.

I narrated this episode to simply say that when they announced that my husband’s sentence had been reduced to 15 years, I was so jubilant and joyous that I did not know what to say. He and I and all of us had been tortured so much during this period that we had completely forgotten that the whole episode was completely illegal, inhuman, and as they say today, an example of systematic violation of human rights. We had forgotten that all those arrests were illegal; as were the years they kept the prisoners in solitary confinement, subjected them to Middle Age tortures, dragged them to the few-minute long court trials, and finally gave them the pre-determined prison sentences. In that atmosphere, we even forgot to ask why we had to pay for the dentist to check the jaws of our prisoner who was beaten so harshly by them that he had lost his teeth. We had forgotten to ask them even more: When you shoot our children so mercilessly, why does the surviving family have to pay for your bullet? Or when you exert such inhuman psychological pressure on prisoners that they lose their mind and run around the prison wards naked claiming to be God, the prophet, or their emissaries, why do you then execute the victim’s brother on charges of denying God or insulting the prophet?

You continue to practice these hideous acts even today. You pressure a young, energetic and talented Iranian, Hossein Derakhshan, to the point where he accepts any espionage charge that you associate him with and then ask for his execution, and pass a 19-year prison sentence on him. You do this so that we will thank God that his life has been spared. We do this while knowing that this Hossein will not be the same Hossein. Just look at his nail-less fingers.

Gentlemen! If you can understand what this “thank God” means, then you should feel shame all over yourself as this is worse than any insult. Much worse. No, gentlemen, we are not happy that Hossein has been given a 19 year prison sentence. We want his release from prison; his mother wants to take care of him. In fact we demand not just Hossein’s release, but that of every person you have imprisoned and whose life and mind you are destroying. We will be content with only one sentence: Freedom. If we did not know this in the 1980s, we know it today at the cost of losing the children of this land and demand it. Our wavering has come to its end.