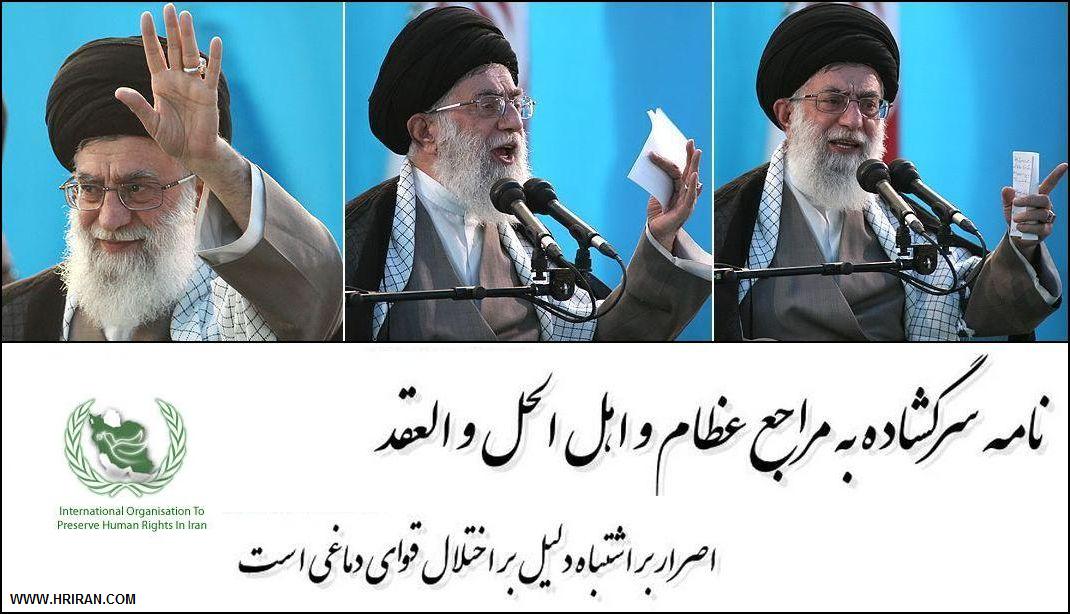 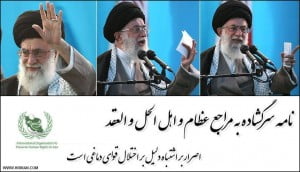 Take for example a mathematician trying to solve a very complicated algebra formula, the more complex the formula is, the more chance of intellectual mistakes.

On the other hand,  if a person is persevering that 1 + 1=17, you may raise questions to the mental state of this person.

Although it is natural for human beings to make rational mistakes, as in the first example, to continue repeating the same mistake may indicate a lack of sanity.

In the Iranian Constitutional Law, the Supreme Leader must possess two attributes; one is to have a right mental state and the other is to understand and implement justice. It is known that reason and justice have a visible reflection on the physical world. Therefore if a person’s actions and judgment are observed over a period of time, it can easily be understood whether the person has a rational state of mind and follows justice or not.

In Iran when the absolute power by Vali-e faqhi is used it is called ‘governmental order of the regime’.

In reference to the Constitutional Law, terms and condition of Vali-e faqhi are, he must possess reason, rationality, fairness, degree of religious law domination and authority. Consequently if a person has the given criteria mentioned above, once he becomes a supreme leader, according to the constitutional law, nobody can limit him to the frame of the law, therefore he has absolute power.

The question that has been raised here about the absolute power given to the Supreme Leader over any laws, which is called the ‘governmental order’ is “does this apply to any person without having the right state of mind, or would they need to have a rational state of mind?”

It is obvious the answers to all the questions mentioned above are ‘No’.

Therefore, if the absolute governmental order is not based on reasoning, logic and Sharia Law, not only will it discredit itself, but also if repeated, it proves that the Supreme Leader is not mentally in a right state of mind to be in power. One of the terms and conditions of a Supreme Leader is reasoning, which comes from a right state of mind. Thus the supreme leader’s position of power becomes automatically invalid, and does not even require the majority votes from members of ‘Assembly Experts’ to nominate him out.

It is comprehensible that if the Supreme Leader does not have the right state of mind to rule the terms of justice, he needs to be removed, because a human being without the right mental state, cannot rule a whole society.

Therefore it is clear that the absolute governmental power of the Supreme Leader will be taken from him, if his state of mind and judgment for justice fails and he will automatically be dismissed from position of leadership. Nevertheless if the Supreme Leader insists on staying in power, without the right state of mind and judgment, he  is a despot in the same way as the Pharaohs and Namroud. For the reasons given, it is every persons’ personal duty to rise up against the Supreme Leader in order to bring him down, this is with reference to the Islamic and rational Law.

Effect of spells on body and mind

There is so much evidence pointing towards the ‘lack of a sane state of mind’ in the decision making of the “Supreme Leader of Iran”, but some of his followers and fans have blamed this incompetency on black magic done to him, and stated: “ this has only effected his body and not his mind”.

The effect of spells and the evil eye on people and prophets has been acknowledged in the Quran (the verse of Vanyakat). As a result, it is not valid for one to say, “the effect of the evil eye/black magic on the body does not effect the mind”, since the intellect works by the cells of the brain and the cells of the brain are part of the body, therefore we cannot seperate mind from the body.

It is clear that the Supreme Leader is not in a right mental state, as he only sees and encourages war and violence, and continuously makes mistakes in his decisions. This is something he even admitted himself in his latest speech.

In addition, experts have argued that the causes of his continuous mistakes are related to black magic, which is affecting the Supreme Leader’s body and mind.

To conclude, the Supreme Leader has admitted his mistakes. His followers, fans and experts have highlighted the danger of repeating the same errors due to the possible effect of black magic or any other influences on his body and mind.  Is this not reason and evidence enough for him to step down?

With all the killing, destruction and injustice that is currently occurring in Iran, and the continuous evidence of corrupt decision making, is this not proof enough to say that the Supreme Leader of Iran has lost his sanity and judgment?

by The International Organisation to Preserve Human Rights in Iran

Iran detains 17 citizens accused of spying for the CIA