The Pentagon has said the number of troops suffering from traumatic brain injuries (TBI) after an Iranian attack on a US base in Iraq on 8 January has risen to 50. 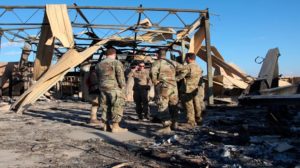 The new total is 16 more than previously announced.

President Donald Trump initially said no Americans were injured and cited this in his decision not to retaliate against Iran.

The attack came amid tensions over the US killing of an Iranian general.

In a statement released on Tuesday, Pentagon spokesman Lt Col Thomas Campbell said that 31 of the injured were treated in Iraq and had returned to duty, including those most recently diagnosed.

Eighteen others were sent to Germany for further evaluation and treatment, the spokesman said, while another was sent to Kuwait and had returned to duty.

Speaking last week about his initial statement that no troops had been injured in the Iranian missile strike on the Ain al-Asad base, President Trump said: “I heard that they had headaches, and a couple of other things, but I would say, and I can report, it’s not very serious.”

When asked about possible TBIs he said: “I don’t consider them very serious injuries relative to other injuries I have seen.”

The Pentagon says no Americans were killed in the incident, with most sheltering in bunkers as missiles rained down.

A defence department spokesman announced on Friday the initial figure of 34 injured, saying at the time that US Defence Secretary Mark Esper had not immediately been aware of the injuries in the days after the attack.

The non-profit organisation Iraq & Afghanistan Veterans of America criticised the Trump administration for taking so long to reveal the extent of casualties following the initial announcement.

“This is a big deal,” its founder Paul Rieckhoff tweeted. “The American people must be able to trust the government to share information about our sons and daughters in harms way. Nothing is more serious and sacred.”

TBIs are common in warzones, according to the US military.

The most common cause of a TBI for deployed soldiers is an explosive blast, writes the US Defense and Veterans Brain Injury Center.

They are classified as mild, moderate, severe or penetrating. A mild TBI is also known as a concussion, and can be caused by a blast’s “atmospheric over-pressure followed by under-pressure or vacuum”.

The air vacuum is capable of penetrating solid objects, making it possible for soldiers to avoid blunt force trauma but still receive an invisible brain injury.

On Friday, tens of thousands of Iraqis protested in the streets of Baghdad against the presence of some 5,000 foreign troops in the country.

The Iraqi parliament has urged all foreign troops – including those from the US – to leave.

On 3rd of January a news spread in social media regarding Qasem Soleimani and AbuMahdi Mohandes who has died by a US drone strike near Baghdad Airport and this was the end of their lives. In social media, especially Iranian users, there was a chaotic situation, some called of “the general of... END_OF_DOCUMENT_TOKEN_TO_BE_REPLACED