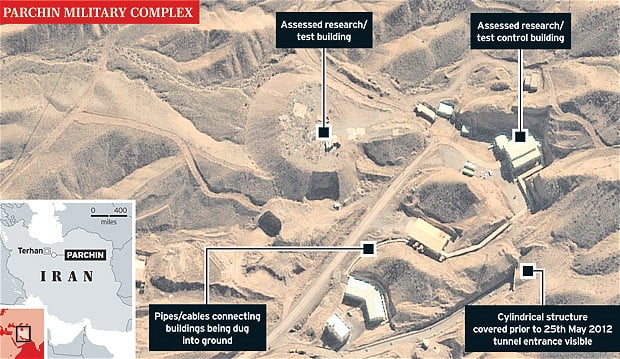 Exclusive: New satellite pictures confirm that Iran has continued to expand a sensitive military site where Tehran is accused of conducting experiments relevant to developing a nuclear weapon.

For the last eight years, international inspectors have been excluded from the Parchin

military complex, where Iran is believed to have tested rockets and explosives. In particular, Iran is accused of using Parchin to experiment with detonators inside an “explosives containment vessel”.

Any such tests would be “strong indicators of possible nuclear weapon development,” according to the latest report of the International Atomic Energy Agency (IAEA).

Inspectors have not been allowed into Parchin since February 2005. But satellite images obtained by the Daily Telegraph show that construction of new facilities has continued inside the complex.

One picture, taken last October, shows a cluster of three new buildings near the entrance to a tunnel. “This area has the appearance of a research and test facility,” said an analysis from McKenzie Intelligence Services, a consultancy.

”One of the buildings appears to be for the purpose of an activity that requires venting, possibly a test facility or laboratory. The other large building appears to be a control building to monitor activity in the first building,” it said.

The largest building has been constructed in a relatively isolated location, cut into a hillside. “This suggests an activity takes place within which may be volatile enough to warrant protection to the surrounding area should anything go wrong,” added the analysis.

The pictures confirm the IAEA’s report earlier this month that Iran has pressed on with construction inside Parchin. Some of the efforts appear to have been designed to cover up evidence of previous work.

The IAEA noted that “in the light of the extensive activities that have been – and continue to be – undertaken” at Parchin, even if inspectors were allowed to visit, their “ability to conduct effective verification will have been seriously undermined”.

Downing Street said Iran should do more to show that its nuclear programme poses no threat. Asked if Britain believed that Iran’s possible production of plutonium at the Arak plant – highlighted by satellite pictures in the Daily Telegraph yesterday – could be wholly civilian and peaceful, the Prime Minister’s spokesman said: “The assurances to that fact have not been forthcoming. That is why we have both a diplomatic process but also the process of the track of economic sanctions.”