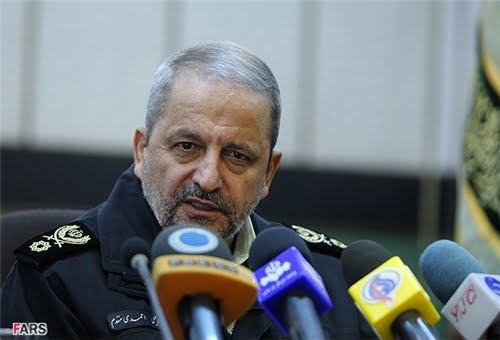 TEHRAN (FNA)- Iran’s police chief Brigadier General Esmayeel Ahmadi Moqaddam underlined preparedness of the Law Enforcement Force to thwart any threat to the country, and said his forces are in stable conditions.

Today, the Law Enforcement Force enjoys proper structure and forces and it is in a stable status under the conditions that the region surrounding the country is insecure,” Ahamadi Moqaddam said in Tehran on Sunday.

In relevant remarks earlier this month, Ahmadi Moqaddam stressed the readiness of the country’s military, security and intelligence forces to defuse any destabilizing threat to Iran’s borders, particularly in the West.

Some people linked to the Islamic State of Iraq and the Levant (ISIL) may be arrested at Western borders, but no command from the ISIL has entered the country (Iran),” he said.

The police chief reiterated that the country’s borders are closed to terrorists, and there is no concern about terrorism.

Hopefully, we are observing all activities and movements in terms of intelligence across the borders of Islamic Republic, and there is no concern,” General Ahmadi Moqaddam underlined.