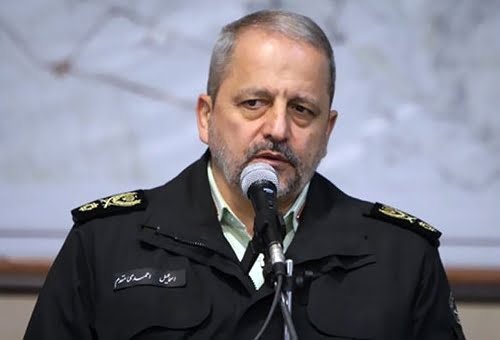 TEHRAN (FNA)- Iran’s Police Chief Brigadier General Esmayeel Ahmadi Moqaddam condemned the crimes committed by Takfiri groups in Iraq and Syria supported by Tel Aviv and Washington, saying that the three are seeking to impair the face of Islam and true Muslims.

“Today, the Takfiri streams have been unmasked as they carry out terror and violence with the support of the arrogant and Zionist countries in the name of Islam,” Ahmadi Moqaddam said, addressing a ceremony in the Western province of Kurdistan on Sunday.

“At present, the triangle of terrorism, Zionism and the US is tarnishing the face of Islam in the name of Islam,” he added.

Ahmadi Moqaddam reiterated that the Takfiri groups are a main component of these triangular moves.

In relevant remarks in February, Kuwaiti Parliament Speaker Marzouk al-Ghanem condemned the crimes committed by Takfiri and Salafi groups in different regional states, and said they have blemished the beautiful face of Islam.

“Based on Islamic teachings, all moves by Takfiris which result in impairing the face of Islam are haram (forbidden),” Ghanem said in an interview with the parliament’s news agency on the sidelines of the 9th meeting of the Inter-Parliamentary Union of the Organization of Islamic Cooperation (OIC) in Tehran at the time.

He underlined the necessity for the further strengthening of unity among Muslims, and said the meeting of the OIC’s Inter-Parliamentary Union was in line with the same goal.