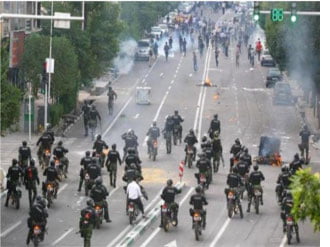 HRANA News Agency – On Sunday, August 28, 2011, intelligence and security agents stormed Abbas Lasani’s place of business. During this raid, a number of guests were beaten and detained. Abbas Lasani is an Azerbaijani political activist and leader.

According to a report by Human Rights Activists News Agency (HRANA), Rahim Gholami, a well-known journalist, and Mohammad Badali are amongst those assaulted and then arrested.

Previously, Abbas Lasani was detained in June 2007 for leading peaceful demonstrations in Ardebil, following a string of protests in Azerbaijan. He was sentenced to 18 months in prison and 50 lashes. After serving time, he was released.

On Saturday, August 27, 2011, demonstrations were held in Ardabil and Tabriz against a proposal made by the Islamic Consultative Assembly of Iran (the Iranian Parliament) in order to address the crisis of Lake Urmia drying up fast. Peaceful demonstrations by Azerbaijani citizens turned violent when Iranian security forces interfered with the gathering to save Lake Urmia. Dozens of protesters were arrested.