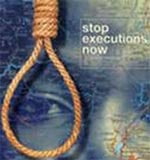 According to reports, political prisoner Ali Zahed is awaiting execution on charges of being friends with executed political prisoner Mohsen Islami. Forty-three year old Ali Zahed is married and has one child. He was arrested on May 2008 after he was attacked by intelligence agents and was taken to the Shiraz Intelligence Agency. He was arrested for being friends with Mohsen Islami who was executed last year for giving financial aid to his brother. Agents of the intelligence agency had even initially issued a bail order for Zahed because of his innocence. But this bail order was never carried out and he was transferred to cellblock 209 in Evin Prison.  After 19 months of detention and being kept in a state of limbo, the 15th branch of the Revolutionary Court headed by Judge Salavati charged him with being a member of a monarchist association and complicity in the Shiraz bombing and sentenced him to death.  This sentence was upheld by the 36th branch of the Revolutionary Court of Review by Judge Ahmad Zargar. He was banned from choosing his own lawyer all through the legal process and a lawyer was chosen for him… The so called legal procedures of the case of political prisoner Ali Zahed have ended and he is awaiting his execution.  There are currently seven death row political prisoners in Evin Prison’s cellblock 350. They include jailed teacher Abdolreza Qanbari, jailed Tehran Bazaar merchant Javad Lari, Hamid Qasemi, Mohsen Daneshpour Moqadam, Saied Malekpour and Hassan Si Sakhti. (Human Rights and Democracy Activists in Iran)