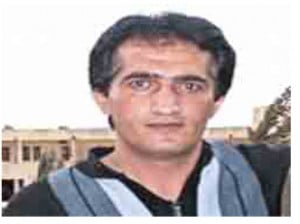 HRANA News Agency – Following four weeks of ongoing hunger strike, political prisoner Kamal Sharifi has been transferred to the prison hospital in Minab Prison, Hormozgan Province. It has been reported that he is in critical condition.Kamal Sharifi is a journalist and political activist from the city of Saghez, Kurdistan Province.

According to a report by Human Rights Activists News Agency (HRANA), Kamal Sharifi began his hunger strike four weeks ago to protest prison conditions. Subsequently, he has been the target of prison official’s wrath and ill-treatment.

Iranian Security forces arrested Kamal Sharifi in the city of Saghez and charged him with the attempt to overthrow the government and acting against the national security. Kamal Sharifi has been sentenced to 30 years in prison and exiled to Hormozgan Province. Currently, he is serving his third year in prison with rapidly deteriorating physical health.  During the last three years of incarceration, Kamal Sharifi has not been permitted to have any visitors.