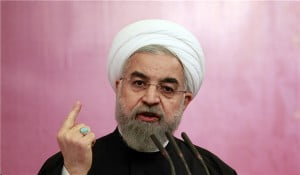 “We have made highly important progress in the nuclear field, but the negotiations receive so much attraction and hue and cry that they overshadow these activities, otherwise, we are running at a higher speed,” Rouhani said, addressing a ceremony to commemorate the space technology day in Iran on Tuesday.

He underscored the country’s progress in different aerospace, genetics, medical and other scientific fields, and said, “We don’t and will not take permission from anyone to make progress in science and knowledge.”

He referred to the enemies’ attempts to seek excuses to pressure Iran and block the country’s scientific development, and said his government is and will continue efforts to defuse the enemies’ plots and show that their excuses and allegations are baseless.

His remarks came after Iran’s Supreme Leader Ayatollah Seyed Ali Khamenei underlined that the dispute over the country’s nuclear program is politicized, used as a pretext to put pressure on the Islamic Republic, slow down its scientific/technological progress, and contain its influence across the region and beyond.

According to Ayatollah Khamenei, even if Iran and the Group 5+1 (the US, Russia, China, Britain and France plus Germany) clinch an accord, the West will come up with new excuses to antagonize Tehran.

The 10th round of negotiations between Iran and the six world powers was held in Vienna from November 18 to 24, where the seven nations decided to extend the talks until July after they failed to strike an agreement.

The latest round of the nuclear talks between Iran and the six world powers was held in February.

Both Iran and the G5+1 negotiators have underlined that cutting a final deal before the July 10 deadline is possible.