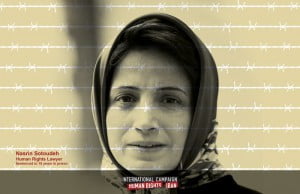 Reza Khandan, husband of imprisoned Iranian human rights lawyer Nasrin Sotoudeh, talked to International Campaign for Human Rights in Iran about his five-hour detention along with his two children and his sister-in-law, during a recent visit with Sotoudeh. Khandan told the Campaign about the disrespectful treatment of prison staff and the physical abuse of his sister-in-law by a prison employee. “During our visit, I was, as usual, making notes in my notebook about the things my wife was telling me to do, when a prison personnel tried to grab the notebook by rudely extending her hand in between me and my daughter. I resisted and did not give her the notebook, because it was my personal item and they were not allowed to inspect it. Inspecting people’s personal property requires a judicial order. If there is a limitation to what people can take to prison visits, the authorities should have made an announcement earlier. There were no prison staff at the entrance with whom we could leave our personal items. On principle, there is no limitation to the personal items of the visiting family members of prisoners, and everyone can go to the visitation room with their personal items. I have had this notebook with me during my previous weekly visits, too. Really, I never did find out why the prison staff wanted to take the notebook away. Then that prison official sent another staff member to me, and I didn’t give the notebook to that other person, either,” said Khandan.

“More than their wanting to take the notebook from me illegally, I was upset by the way they were trying to take it. He/she* wanted to take the notebook away from me by force in front of my children and with my wife on the other side of the glass, unable to do anything, and with families of other prisoners looking on in shock.  When the prison staff extended his/her hand between me and my daughter in that rude manner, for the first time in a year of prison visits, my daughter started crying. We all felt helpless.”

“The notebook is [an ordinary notebook] with blank pages in which I make notes of the things my wife tells me [to do] during our visits. I don’t know, for example, if she wants pots and pans…anything that is included in a normal life. All prisoner families do this. Also, my wife had many clients whose cases are now handled by her other colleagues. But her colleagues cannot come to visit my wife, so I ask Nasrin their questions and take notes. I always do this and I don’t know why this time the prison personnel became suspicious. I even tore out the sheet on which I was making my notes and handed it to the officer to solve the misunderstanding, but she wanted the whole notebook, and as her request was illegal, I didn’t give in. In fact, later, when the Judge saw the notebook, he said  that there was nothing special about it,” added Khandan.

Khandan told the Campaign about the escalating hostility toward his family during the visit. “In addition to demanding to have the notebook, they said that they must do a bodily search, which we resisted again. I told them that there must be a warrant from a judge for this. They then said let’s go to court, and we told them that we were not there to go to court, but for visitation. But several prison officials came and took us by force. First they wanted to put the women in one car and the men in another car, and we resisted again. Ultimately, they put all of us in the same car. We were there for five hours. I asked them several times to allow us to make a phone call to our family and explain the reason for our delay in returning home, but they wouldn’t let us. My sister-in-law was supposed to meet her husband on the street several hours earlier, so she tried to make the phone call on her cell phone. But, suddenly, an officer came and pulled the cell phone from her hand in a very rude and offensive way. She resisted and did not give her the cell phone, and the officer injured her on several spots on her face and hands. Her nails made marks [on her face and hands]. It was a horrible scene in front of the children. My sister-in-law is a university professor and this was not the way to treat a scholar. Regardless of positions and jobs, every individual is respectable and must be treated with respect,” said Nasrin Sotoudeh’s husband.

“Finally, the head of the court came with an official letter, stating that we had to go through a body search.  We were all searched and in the end they did not find anything on us,” Reza Khandan added.

“When this happened, Nasrin said that starting next week, she will not come to visitations any more, and if this disrespect continues, she will go on a hunger strike.  She didn’t want to come to the visit this week either, as she has observed that after the booth visits, they are not allowing her to visit her children in person even for a few minutes.  Before the visiting hour started, they signaled us from behind the glass, saying that Ms. Sotoudeh was not coming for the visitation, but it seems that when she heard that the whole family were waiting for her, she couldn’t stand it and came.  Now I don’t know what will happen next Sunday.  The prison phones are disconnected, so I will have to wait until next week,” said Khandan.

Human rights lawyer and activist Nasrin Sotoudeh has been sentenced to eleven years in prison, and 20 years’ ban on legal profession and foreign travel. She has been in prison for the past 11 months, even though her lower court ruling has not yet been announced as final. Nasrin Sotoudeh has embarked upon hunger strikes several times in order to protest her illegal prison conditions and her case process. Her husband, Reza Khandan, remains under pressure for the interviews he has given to foreign media.

*Due to the fact that the Persian language is gender neutral, the interviewee did not specify the gender of prison personnel.

The Khatam al-Anbiya camp and future of the IRGC empire

Continual hardships for Majid Tavakoli in the new year