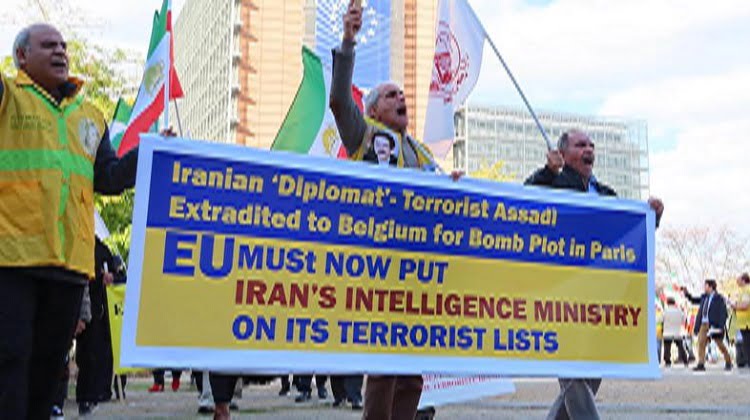 The Iranian community in Brussels protested on Monday calling for Iran’s Ministry of Intelligence to be placed on the European Union’s terror black list four months after a plot by Tehran to attack an opposition rally in Paris.

“We expect EU today to break the silence. We want EU to be active and to be on the side of Iranian people,” said Firouz Mahvi, Member of the National Council of Resistance of Iran (NCRI).

He spoke to Al Arabiya English as more than 50 Iranian refugees gathered on Monday in front of the European Commission in Brussels. The protesters gathered to condemn what they say is the European Union’s silence to mass executions, human rights violations and repression of women in Iran.

The protest took place almost four months after the foiled plot that targeted the massive opposition rally led by the NCRI in Paris on June 30. In the beginning of October, French officials stressed that there was “no doubt” that Iranian Ministry of Intelligence was behind the plot to attack the rally.

“I was among the people who were there on June 30” said Paulo Casaca, a former member of the European Parliament. “So I can say that, even personally, I have a case here to the European External Action Service (EEAS) and there has not been a single word from the EEAS on the issue,” he added following his statement at the protest in front of the EU Commission.

On July, Assadollah Assadi, an Iranian diplomat of the Iranian Embassy was arrested in Germany on terror charges and has been extradited to Belgium. He is on trial, accused of handing over a highly-explosive device to an Iranian-Belgian couple who were planning to bomb the June 30 rally. The couple and another Iranian man have been arrested. The case is still under investigation by the Belgian judicial authorities.