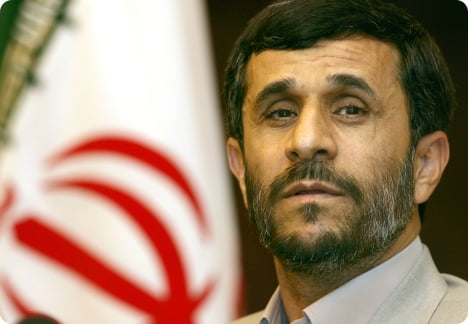 United Against Nuclear Iran, an advocacy group, has demanded that managers of the upscale Warwick Hotel refuse to host Ahmadinejad and his delegation and have urged a boycott of the international hotel chain.

“Ahmadinejad is not welcome here. His visit to Manhattan is offensive given Iran’s heinous track record and its alliance with Al-Qaeda,” UANI executive director David Ibsen said in a statement on Monday.

The group also announced that it was launching a mobile billboard, to be driven by truck near the UN and the Warwick hotel for the next several days, that will contain an anti-Ahmadinejad message.

The mobile billboard, which is similar to a stationary billboard that UANI has placed near Times Square, shows Ahmadinejad and says: “As we remember 9/11 ten years later, Al-Qaeda’s silent partner is coming to New York.”

Iran has denied harboring Al-Qaeda militants, and conclusive evidence has never emerged of a link between Tehran and the extremists who attacked New York and Washington on September 11, 2001.

The United States considers Iran a state sponsor of terrorism, and Western countries have also repeatedly accused the Islamic republic of seeking to develop an atomic weapon — charges Tehran has vigorously denied.

Tehran has been hit by a series of UN sanctions for its refusal to rein in its controversial uranium enrichment program.

Separately, New York’s prestigious Columbia University was hit with a firestorm of controversy last week following reports that a student group would dine with Ahmadinejad.

The student group, called the Columbia International Relations Council and Association, later said the dinner was only tentative. Members of the student group did not respond to requests for comment.

Ahmadinejad is due to address the UN General Assembly on Wednesday and hold a press conference Friday.

Tehran has not confirmed whether the dinner with students will take place, but Iran’s mission to the UN has not ruled it out.

“Each year, the president attends meetings with the different classes of the American people who are interested in meeting him, and his meeting with the students of different universities is part of the same plan which happens (at a different place and with a different group) every year,” the mission said in a statement carried by Iran’s semi-official FARS news agency.

Iranian media reported last week that Ahmadinejad would bring a gift for UN delegates: a book detailing the “injustices” suffered by Iran during its World War II-era occupation by Britain and the Soviet .

Ahmadinejad has repeatedly sparked protests and provoked anger during his annual visits to the UN General Assembly.

Last year he sparked fury when he accused the United States of staging the 9/11 attacks in his speech at the assembly.

In 2009 a dozen delegations, including the United States and France, staged a walkout to protest his fiery speech to the assembly, which they branded as “hateful and anti-Semitic.”

He drew crowds of protestors when he spoke at Columbia University in 2007, a controversial public appearance in which he questioned the historical veracity of the Holocaust and declared that there were no homosexuals in Iran.

Student killed in Shiraz, when regime forces throw him down from a bridge. 20 Feb 2011