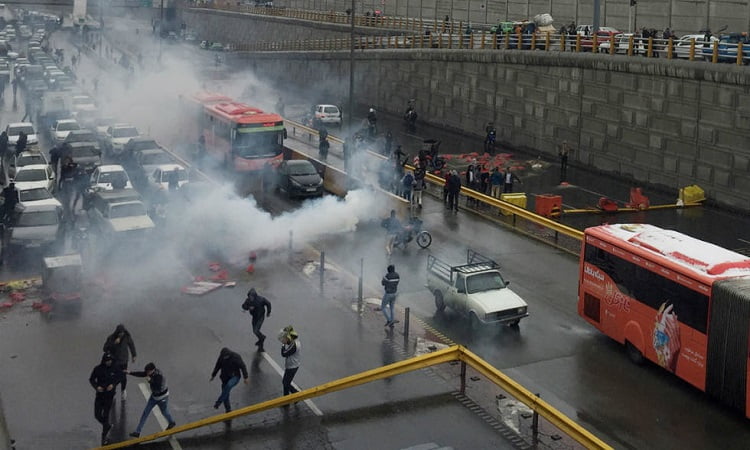 The spokesman for President Hassan Rouhani’s administration claimed in a news conference on Monday morning that compared to the previous day there have been less protest demonstrations in Iran on Monday. 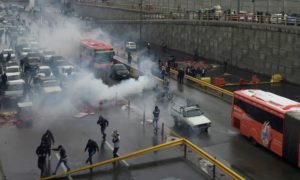 Meanwhile he claimed some demonstrators have used weapons during the previous days. Ali Rabiee, a former Intelligence Ministry operative, spoke as if he was reporting about a full war between the government and those who protest a sudden hike in the price of gasoline.

He also said that protesters took some security officers hostage but did not elaborate further. Meanwhile he declined to give away information on the casualty toll of the first three days of the protests.

However, reports compiled by journalists and observers following reports from various regions of the country indicate a minimum of 100 and up to 200 people killed.

The Islamic Revolution Guard Corps (IRGC) issued its first statement on the protests Monday, echoing what other senior officials have said about protests being fueled by the United States and Iranian opposition abroad. IRGC also vowed to use all means to restore order.

Demonstrations have been going on in Iran for the fourth day after the Iranian government increased the price of gasoline Friday morning. Security forces have used lethal force, with tens of people killed.

Despite an all-out clampdown on information, it appeared on Monday that the government’s use of lethal force has so far failed to deter protesters.

In the meantime, Rouhani’s threats against the demonstrators during a cabinet meeting on Sunday has further damaged his image. Rouhani warned the nation that they are being watched and identified by security forces by CCTV cameras everywhere. He said he has seen some films and there were “only a few” demonstrators.

The common point in remarks by Supreme Leader Ali Khamenei, Rouhani and Rabiee was their conspiracy theory about the involvement of foreigners in instigating the protests.

One or two economists accompanying Rabiee to the news conference acknowledged that the government had failed to convince the people prior to implementing the price rise.

Security forces round up protesters, text messaging blocked in Tehran

Court Officials to Families of Ali Saremi and Reza Sharifi Boukani: “Why Are they Still Alive?”

Mehdi Farrahi was kept in solitaire cell for weeks