Apr 05, 2019 Economy, Politic, Slider Comments Off on How Putin Plays Israel and Iran Against Each Other in Syria

Israeli Prime Minister Benjamin Netanyahu and Russian President Vladimir Putin have been engaged in a flurry of discussions recently, at least some of which are likely tied to Iranian activities in Syria. 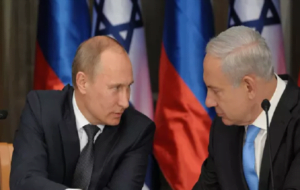 The meetings come in the shadow of recent reports of a major Israeli airstrike on March 28, targeting an Iranian weapons warehouse near the northern Syrian city of Aleppo, which reportedly resulted in large blasts and casualties.

Russia leads a pro-Assad military coalition in Syria, of which Iranian forces are a central part. Yet it also maintains a deconfliction channel with Israel to avoid unintended clashes between its air force and the Israeli Air Force, both of which are active in the Syrian arena.

Putin has also attempted to play the role of mediator between Israel and Iran, seeking to douse the shadow war raging between them on Syrian soil. Israel, for its part, is determined to disrupt Iran’s plan to turn Syria into a war front against it.

Netanyahu will fly to Moscow on Thursday for a meeting with Putin, just five days before Israel’s April 9 elections. On April 1, Netanyahu and Putin held a phone conversation to talk about “military cooperation issues,” according to the Kremlin, as well as “pressing bilateral issues,” and “the situation in the Middle East region.”

On February 27, the two leaders met in Moscow to discuss Syria. Netanyahu said that the two sides reached an agreement on how to coordinate between their militaries. They also apparently agreed on a goal of getting “foreign troops” to leave Syria, according to Netanyahu.

While Russia will not be able to satisfy everyone, it does understand that it will need to leave each side with “half of its desires,” Professor Uzi Rabi, director of the Moshe Dayan Center for Middle Eastern and African Studies at Tel Aviv University, said.

On 3rd of January a news spread in social media regarding Qasem Soleimani and AbuMahdi Mohandes who has died by a US drone strike near Baghdad Airport and this was the end of their lives. In social media, especially Iranian users, there was a chaotic situation, some called of “the general of... END_OF_DOCUMENT_TOKEN_TO_BE_REPLACED