BREAKING NEWS
GMT+2 01:11
Home Iran Briefing Exclusive The International sanctions against the Quds Force and Khatam Camp will not be delisted 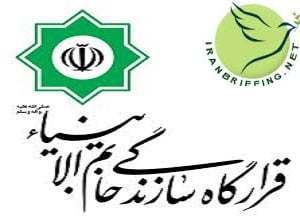 Iran Briefing- After more than two weeks since signing the nuclear agreement, more details of this agreement with Iran is releasing, details which indicates that 90 identified individuals and legal entities affiliated to the Iranian Revolutionary Guard, have been removed from the sanction list. Reuter’s news agency reported an analysis of the different aspects of this agreement in the latest survey on the nuclear deal. According to the report, the overseas branches of Iranian Revolutionary Guard, “Quds Force”, and also“Khatam Al-anbiya Camp “as the military arm of this powerful economic institution, will remain in the list of international sanctions.

At the time of issuance of the sanction, in related news the role of the IRGC individuals and entities removed from the sanction list on the progress of Iran’s nuclear program and military activities were mentioned. However it is still unclear that based on which advantages Western countries willing to accept them out of the sanction list.  Reuters also has reported about the benefits of lifting the sanctions for the businesses owned or affiliated by the Iranian Revolutionary Guard. The report starts with the point of the Israel and the United States’ dissatisfaction with the benefits for quasi-governmental companies and institutions belonging to the military, but Iran has embraced this event due to absorbing foreign investments. This report knows the Revolutionary Guard’s companies as the “escort” of many attractive industries of Iran. Indeed there has been a hidden delight in the remarks of opponents of nuclear agreement. The opponent of agreement who were “traders of sanctions” on Iran at that time, seeking their own interests with the possibility of lifting the sanctions havefound new business and as a result they have been renamed as “post-sanction traders” now.

Although 90 individuals and entities belonging to the Revolutionary Guards have been removed from the list of sanctions, but the process of entering theIRGC’s companies and businesses into the field of international trade, will be a very slow and complicated process. These companies have to wait for at least 8 years to be completely removed from sanction list. Katam Al-anbiya Camp, established in 1989 on the order of the Supreme Leader, is a good sample of these institutes, a large contract with 812 registered companies inside and outside the country.

While these companies are still in the black list of the U.S. sanctions against Tehran, in recent years many Iranian civil and infrastructure projects in significant fields such as energy, construction and telecommunications, with the approval signs of government to “leave the bidding process”, have been granted unconventionally to the Camp and its subsidiaries. These transfers indicate that despite the sanction situation in the country, affiliated companies of the Camp and IRGC, have not seen much financial damage, this event occurred while the current private sector in the economy have faced many fluctuations and even bankruptcy.

In other part of the Reuters report: “A handful will see EU sanctions removed once the nuclear deal is enacted on implementation day, expected within the next year. While others such as Bank Saderat Iran(BSI), accused by Washington of transferring money to groups it deems “terrorist”, such as Hezbollah and Hamas, will have EU sanctions lifted in eight years; but BSI and other companies with same accusation will remain in the U.S. sanction list.” It continues: “Most IRGC entities including the elite Quds Force, will not be de-listed by the EU until the second phase in some eight years. But all will remain then under U.S. sanction for “terrorism support activities” or as “proliferators of weapons of mass destruction”.

“ Any IRGC companies delisted at the implementation stage would be able to “move money through global banks, access the SWIFT financial system, obtain and extend credit” said Mark Dubowitz, executive director of the Foundation for Defense of Democracies. In the situation that people are optimistically celebrating the nuclear agreement hopingthe agreement will boost business and improve the livelihoods of the economy of Iranian families, many companies of the IRGC which are directly involved in the purchase and production of military equipment will be removed from the sanctions list, lifting of the sanctions could have a negative impact on public optimism in the coming days.It should be mentioned that based on the executive director of the Foundation for Defense of Democracies’ view“Now the Gaurds will be able to lever their dominance in Iran’s economy to serve as a conduit for the new business flowing into Iran, and will likely demand joint ventures, and even seize the contribution of private sector.”

The benefits of the removal of sanctions to IRGC is the main attention part of the U.S. Congress for implementation. A European diplomat said to Reuters, “The Guards turnover has been around 10 to 12 billion dollars in last year.” In deed the Guards that was the most powerful “sanction traders” now will become the “empire of post-sanction trader”. This event can be mentioned as a sign of continued policy of elimination of the mediocre and the private sector during “Ahmadinejad” presidential;the event named as democracy controlling project and free economy, are followed for years in institutions affiliated to the Supreme Leader as the “research institutes”, by the security and military chambers and the planners of the theory implementing “Islamic state” instead of “Islamic Republic”.