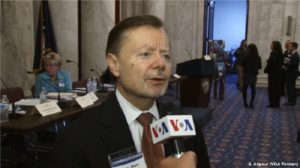 In its annual report published Monday, the bi-partisan U.S. Commission on International Religious Freedom (USCIRF) said Iran merits designation as one of 16 countries of particular concern based on conditions in 2018.

The State Department has made that designation for Iran every year since 1999, a move that enables the United States to impose travel restrictions and other sanctions on Iranians responsible for perceived religious freedom abuses.

“Sadly, this year [our report] shows no progress in Iran at all between last year and this year,” USCIRF Commissioner Gary Bauer told VOA Persian at a Monday presentation of the report at the Russell Senate Office Building in Washington. “[Iran]) continues to persecute various religious minorities including Muslim minorities that don’t agree with its Shi’ite regime.”

There was no immediate response to the USCIRF report in Iranian state-approved media.

Iran is an overwhelmingly Muslim nation led by Shi’ite clerics who established the Jaafari school of Shia Islam as the state religion in the 1979 Islamic Revolution. Of the 99% of Iranians who are Muslims, U.S. government data show 90–95% are Shi’ites while 5–10% are Sunnis.

Iran’s constitution permits the practice of four schools of Sunni Islam. But, it does not recognize Sufism, a mystical form of Islam whose adherents, known as Dervishes, are seen as a heretical minority by Iran’s ruling clerics. USCIRF’s report said hundreds of Sufis were arrested and scores were sent to solitary confinement and beaten in prison last year.

USCIRF said Tehran also discriminated against minority Sunnis by rejecting their repeated requests to build an official mosque in the Iranian capital last year. It said several Iranian Sunni clerics were targets of violence, with a gunman killing one last July in southern Iran.