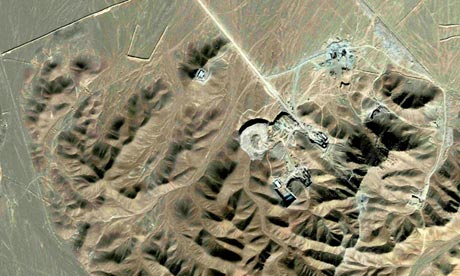 The latest International Atomic Energy Agency report on Iran’s nuclear programme due out on Thursday is expected to say that Tehran has rapidly increased the quantity of equipment at an underground uranium enrichment plant but has not started using the new machinery to produce nuclear fuel.

the fortified cavern at Fordow, near the city of Qom, but are not yet spinning, and the rate of uranium production has not risen since the last report in May.

The IAEA inspectors will also complain about Tehran’s lack of cooperation with their investigation into alleged past Iranian nuclear weapons work. Attention will be drawn in particular to its refusal to allow them into a suspect site at Parchin, where satellite images show buildings being bulldozed and covered with earth in what IAEA officials believe is an attempt to “sanitise” the area of incriminating trace elements.

In an effort to intensify the IAEA investigation, the agency is forming an Iran Task Force to focus on allegations of a secret weapons programme. The UN secretary general, Ban Ki-moon, was reported to have raised international concerns about Tehran’s nuclear aspirations at a meeting on Wednesday with the country’s Supreme Leader, Ali Khamenei.

During his visit to the Nonaligned Movement meeting in Tehran, Ban also registered “serious concerns” over Iran’s human rights record.

“We have discussed how United Nations can work together with Iran to improve the human rights situation in Iran. We have our serious concerns on the human rights abuses and violations in this country,” he said.

Western officials said that while the new IAEA quarterly report on Iran shows that the Tehran government continues to flout Security Council resolutions calling for a suspension on enrichment, there is no sign of a “game-changing” acceleration in the programme that would warrant the military action threatened by Israel.

Alarmed by claims by the Israeli prime minister, Binyamin Netanyahu, that the report showed Iran was “continuing to make accelerated progress toward achieving nuclear weapons while totally ignoring international demands”, US and European governments took the unusual step of giving briefings, before IAEA inspectors presented the report to member states, to play down its significance.

Western officials believe that while Iran is steadily increasing its capacity to make nuclear weapons in the future, its leadership has not yet made the political decision to do so. Tehran insists its programme is intended entirely for generating electricity and producing medical isotopes.

The Obama administration is particularly nervous that Netanyahu might order attacks on Iranian nuclear facilities at the height of the US presidential campaign in the hope of drawing Washington in, under pressure from pro-Israeli public opinion. A White House spokesman, Tommy Vietor, broke precedent by commenting on the expected report before publication by insisting “there is still time and space” for diplomacy in the long-running nuclear stand-off.

The Fordow site is especially sensitive firstly because the centrifuges are being used to make 20%-enriched uranium, which could be used for medical research but which could also be further enriched to become weapons grade. Secondly Fordow’s heavy defences mean it would be very hard to destroy with air strikes, leading the Israeli defence minister, Ehud Barak, to claim that once Iran had completed the plant it would have entered “a zone of immunity”, which would have to be prevented at all costs.

The last IAEA report in May said that 1,064 centrifuges had been installed in one of two enrichment halls in Fordow, each with a capacity of about 1,400, but less than 700 of the installed machines were in production.

Iran has now produced about 190kg of 20% enriched uranium, which would be enough for one nuclear warhead if further enriched. But nearly 100kg of that total has been converted into reactor fuel plates – these would harder to turn into material for a bomb.

“It’s more of the same,” said Jim Walsh, an expert on the Iranian nuclear programme from the Massachusetts Institute of Technology, arguing that Iran’s desire to install more of its centrifuges underground was understandable under threat of air strikes. He added that Iran had already entered a “zone of immunity” in Israeli terms, because if it did want to make nuclear weapons, it would probably be too late to stop it militarily.

“You can’t bomb the knowledge out of their heads and you can’t destroy Fordow.”