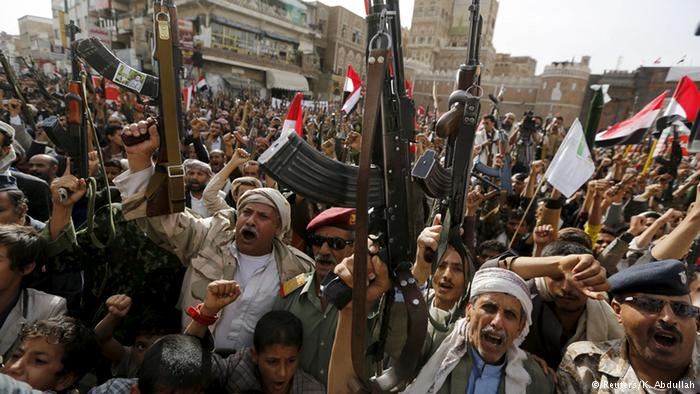 Weapons seized in the Arabian Sea indicate Tehran is arming Houthi rebels in Yemen, British-based activists have said in a report. The shipments included guns made in Iran, Russia and possibly North Korea.

The suspected pipeline leads from Iran to the coast of Somalia and then across the Gulf of Aden to Yemen, Conflict Armament Research said in a report on Wednesday.

“This report provides evidence suggesting Iran is playing a hand in supplying weapons to the conflict in Yemen,” said Jonah Leff, the director of operations for the arms research group.

Australian, French, and US warships have seized some 4,500 weapons while raiding three traditional Middle Eastern boats, so-called dhows, in February and March of this year. According to the report, the arms shipments included 2,000 assault rifles “characteristic of Iranian manufacture” and 64 Hoshdar-M Iranian-made sniper rifles, all of them new.

The western ships found light machine guns, suspected to be of North Korean origin, in two of the three dhows. The guns had the same serial number sequence, “which suggests that the material derived from the same original consignment,” the report added.

Two of the boats were made by Iranian shipbuilder Al Mansoor, whose yard is next to an Iranian Revolutionary Guards compound.

“Since 2012, Al Mansoor dhows have been involved in multiple cases of trafficking in heroin, cannabis, and more recently, weapons,” according to the report.

While admitting that their findings were “relatively limited,” the researchers point to “significant quantities of Iranian-manufactured weapons and weapons that plausibly derive from Iranian stockpiles.”

Saudi Arabia has long accused Iran of using Houthis to fight a proxy war against the government in Yemen. The Sanaa regime is backed by the oil-rich kingdom.

However, both the rebels and the officials in Tehran deny this claim. Iranian foreign ministry also rejected the allegations in the latest report.

“It is not true, and Iran has never provided weapons to Houthis or any other group in Yemen,” the official told Reuters. “But we have always supported and will continue to support oppressed groups and nations.”

Experts believe it is very hard to control smuggling in the region, with Yemen torn by fighting and Somali marine forces struggling with poor training and equipment.