Following the fall of the Sunni-dominated Baathist regime in Iraq, Jordan’s King Abdullah II warned in in 2004 about the rise of a religious-political movement based on Shiite political Islam in the Middle East, which he called the “Shiite Crescent” and later the “Iranian Crescent.” This crescent stretches from Iran to the Gulf to Iraq and then Lebanon. 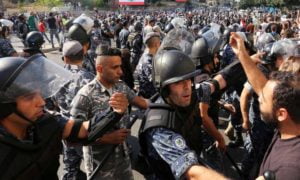 But now this same area is witnessing a new Shiism that opposes political Islam and is calling for secular democracy. Indeed, some religious leaders in the main three countries of the crescent — Iran, Iraq, and Lebanon — are developing a new theology that supports secularism.

The representative of Iraq’s top cleric, Ayatollah Ali al-Sistani, said in a Friday sermon in Najaf on Dec. 20, “People are the source of authority and it receives its legitimacy from them.” Then he asked politicians to go to the people to help resolve the current crisis, to listen to them and to organize early elections after forming an independent electoral commission and a fair electoral law. He warned about foreign inference in Iraqi matters, a reference to Iran in particular as well as to other influential foreign parties in Iraq.

In previous speeches, he criticized the idea of “guardianship of the Islamic jurist” (velayat-e faqih), which is the political form of the state in Iran, saying, “The religious authority only provides advice and recommendations in the direction of the people’s interests, but in the end, it is the people who decide what is the best for their current lives and future without any guardianship from any parties on them.”

During his religious leadership, Sistani has articulated a secular political doctrine, the “civil state,” in opposition to velayat-e faqih. He also has supported the idea of separation between the state and the religious institution.

Oligarchy of IRGC and Mullahs: Two Parties in Need of Each Other

Why the young people of Iran are rising up in protest