Security forces round up protesters, text messaging blocked in Tehran

Reports from the Iranian capital indicate a tight security in anticipation of opposition protests marking the first anniversary of the house arrest of Green Movement leaders Mir Hossein Mousavi and Mahdi Karroubi.

Eyewitnesses say police helicopters have been hovering “abnormally” over the area where the protests that were scheduled to start at 4pm.

Security forces have been deployed along the protest route watching over pedestrians on pavements. Bookstores and shops on Engelab and Azadi Boulevards were shut down before demonstrations got underway and plain-clothed forces on motorcycles have been seen patrolling the path in the past few hours.

A heavy traffic congestion has also been reported in a number of areas of Tehran including the Vali-Asr intersection, the city’s Mellat Park, and Vali-Asr boulevard. The constant honking of car horns is also quite noticeable in the aforementioned areas.

Meanwhile, at around 6:30pm in Hafte-Tir Square, plain-clothed forces began to randomly confiscate mobile phones from pedestrians after which they inspected them with the owners’ consent. This happened as three individuals in the back of a van filmed passers by. Agents were also seen filming individuals passing by the Vali-Asr and Enghelab metro stops.

We’ve also learned that in a new tactic, plan-clothed security agents posing as disgruntled civilians infiltrated the crowds and attempted to identify key elements in the demonstrations.

Sources told the Green Voice of Freedom that a large number of protesters have been arrested on Enghelab Boulevard. There are also unconfirmed reports about the arrest of dissenters in the proximity of the main protest path in the capital. Some have been released shortly after being detained.

The SMS text messaging services has also been disrupted in the country. GVF sources confirmed that the entire SMS network has been blocked in Tehran. 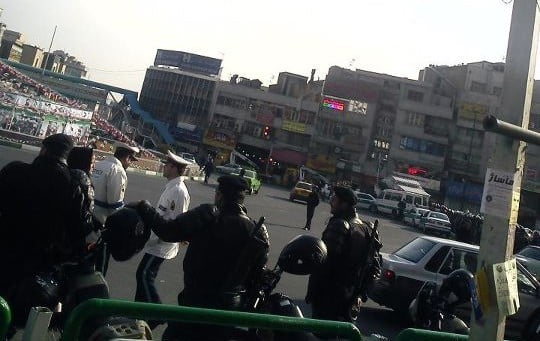 The following image shows the heavy security deployment at Tehran’s Enghelab (Revolution) Square at around 3pm local time. Tight security has also been reported at other points on the routes designated for today’s opposition protests.